Outrage at Vatican’s choice of image 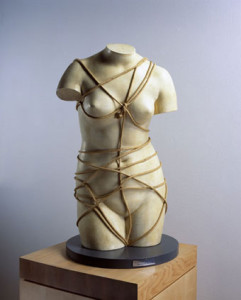 Catholic reform group ‘We Are Church Ireland’ has expressed outrage at the Vatican’s use of a “deeply disturbing” image of a woman to illustrate a discussion document for the plenary assembly on women’s cultures which is currently taking place in Rome.

In a statement, ‘We Are Church Ireland’ spokesman, Brendan Butler said the group was “deeply disturbed” by the use of the image of ‘Venus Restored’, which was produced by the artist Man Ray in 1936.

The headless woman, with no arms or legs, and in bondage, was chosen by the Vatican’s Pontifical Council for Culture despite the fact that Man Ray had a strong interest in sadism according to Soline Humbert, a member of ‘We Are Church Ireland’.

She told CatholicIreland.net that while some people might argue that you can take a work of art on its own merits that wasn’t sufficient to justify using this image with its “strong connotation of bondage” and the fact that it was a nude as well.

“Man Ray photographed women wearing implements of bondage and enacting scenes of torture. He also helped others, like William B Seabrook, realise in real life his fantasies of women bondage,” she said.

The spiritual director and advocate for women’s ordination asked, “What is behind this choice of female bondage image by the all-male Pontifical Council for Culture? Is it the choice of the group of women behind this discussion document? What message does it seek to convey? And who are the women behind the document – there is no transparency,” she criticised.

She said she had asked other women for their views on the image and that most replies considered it “horrific, shocking, disgraceful and appalling.”

“It gives an insight into the subconscious of some of the men in the Church – is that how they see women? As objects. We must remember that this plenary session is men discussing women – women are an object of discussion.”

However, the director of the Contemporary Collection at the Vatican Museum, Micol Forti, this week defended the use of ‘Venus Restored’ stating that “it is not a headless or an armless body but a reflection on classical tradition with the possibility of rediscovering a role for women in contemporary life”.

Soline Humbert questioned why with plenty of contemporary women artists, an image by a woman about women was not selected rather than this disturbing one which depicts women through “a very distorting male lens”.

From 4-7 February cardinals and bishops discussed a host of women’s issues such as domestic violence, plastic surgery, and women’s contributions to the Church.

More information on the assembly: http://www.cultura.va/content/cultura/en/plenarie/2015-women/outline.html

The text of the Plenary Assembly’s working document on Women’s Cultures is available at: http://www.cultura.va/content/dam/cultura/docs/pdf/Traccia_en.pdf