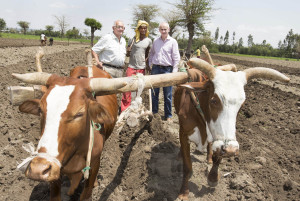 “The solutions that are being put into place today (in Ethopia) are the same as those that spurred Ireland’s economic development,” he said.

“In regions where few have their own transportation, and hardly any small farms have electricity, it is only by working together that farmers will be able to increase their incomes,” he explained.

“We saw this in Ireland, when the agricultural cooperative movement transformed the lives of thousands of farming families. It is the same in Africa today.”

Up to 80% of the rural poor in Africa rely on small-scale farming for their survival, and Eddie Downey said that with investment and education most of the farms in the region have the potential to grow much more.

“African agricultural has great potential. There are huge untapped markets – both domestically and regionally. When you see the work that organisations like Gorta-Self Help Africa are doing to support agricultural production and organisation, and look at the potential markets that exist for produce, it is easy to see the vital role that farmers have to play in economic development,” he said.

He added that, with cities in Africa growing rapidly, there is a ready market for the goods that farmers’ produce. He suggested that trade between neighbouring countries in Africa is only a fraction of that between European states, so there is huge potential to improve production to supply such market opportunities. 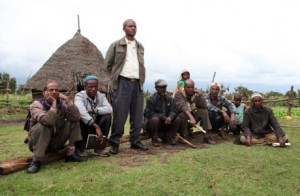 One project that Self Help Africa’s Ethiopian team has been involved in is seed production with Edget Union. The collaboration has enabled co-op members to receive training and support in quality seed production. The end result is an improved supply of wheat seed across the region.

In 2013 Edget (which means ‘progress’ in the Amharic language) supplied over 15% of demand in SNNPR Region, with the union providing up to 100% of first generation wheat seed in some districts. At harvest, growers reported increased yields, and increases of up to 75% in income.

The project has changed the attitude of government and research staff, says district Seed and Quality Control Officer Malaku Bilihu. The Ministry now recognises the capacity of farmers’ groups to enter the seed market as autonomous local seed businesses.

Self Help Africa has since presented its experience with Edget at numerous conferences, and the Government of Ethiopia has included the pioneering work in its recently prepared draft seed development strategy.