Irish farming experts are in Eritrea to visit dairy and potato programmes set up last year.

The humble spud and dairy cow, so familiar to Irish people, are helping take people in Eritrea from farming for self sufficiency into creating an income for the family and locality.

The NGO Vita, Teagasc and Gorta/Self Help Africa group are among those visiting the farmers to evaluate pilot programmes, which were set up a year ago in partnership with the Eritrean Ministry of Agriculture.

Some 20 dairy farmers involved have early results showing a doubling of the milk yield.

The potato trials have involved 25 farmers and they too hope to double potato crop harvests.

This research-led programme supports farmers as they develop every aspect of from production to market, for example from establishing co-ops to improving seed stock, market research, pest and disease control.

“A world class seed potato, Electra, which was specifically bred by Teagasc has arrived and has been tested,” said Gerry Boyle, Director of Teagasc, Ireland’s agriculture and food research agency.

“This potato variety can more than double the yield of the current local variety. This pilot programme is expected to drive a national potato programme that will realise the potential of thousands of Eritrean potato farmers.”

Vita has worked in partnership with the Eritrean Government, Irish Aid and the European Union for the past twelve years and has invested in over 45,000 improved cookstoves as well as drip irrigation schemes, dams and water collection points.

There has also been tree planting programmes to help prevent soil erosion and provide renewable energy in a country that, according to the charity, is paying a particularly heavy price for climate change.

Séamus Crosse, Vita Chairman, praised Teagasc and the Irish Potato Federation for bringing so much expertise to the table, ranging from large scale growth and production to value added products and market management, and commercial elements into the programme.

“Ultimately this programme will succeed because the local farmers, and the Eritrean Government, are ambitious for success,” he said.

Gerry Boyle of Teagasc said he is very optimistic about the partnership with the Eritrean Government.

“I feel that working together will have great impact on Eritrean farm families,” he said. “The Irish agriculture experience is rich in lessons learnt and successes won, and has evolved to meet so many challenges,” he said.

He explained that an integrated system is the best way to improve and this includes sound research, education and training, and a solid infrastructure. 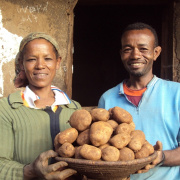 Earlier in the year, around the St Patrick’s day holiday period, the Irish Potato Coalition hosted an international workshop in the Ethiopian capital, Addis Ababa, to share what has been learned on that potato programme so far.

International NGOs from as far away as Australia as well as many African countries came together with the local co-ops, farmer’s groups and women’s networks.

John Weakliam, CEO of Vita, described the event as a huge opportunity for African potato farmers.

“The potato is the fourth most important food in the world, and is one of only a few foods that can sustain people on it’s own,” he continued.

“The humble spud is the hero of the campaign against hunger here in Africa, and it is very fitting that this event, the first of its kind, takes place on St Patrick’s Day,” he said.

Other speakers included Paul Sherlock, head of development at the Irish embassy in Ethiopia, and Vita project managers who have successfully rolled out the programme to 3,000 farm families.