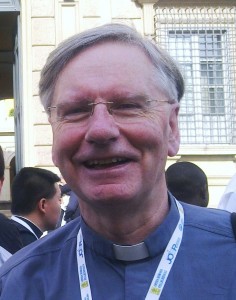 The new spiritual director of the Irish College in Rome has indicated that life at the college is moving forward and that Cardinal Timothy Dolan’s visitation report wasn’t “totally satisfactory.”

The appointment of Fr Tom Norris, a former professor of systematic theology from St Patrick’s College Maynooth, was announced by the Irish Bishops’ Conference at its June meeting. He takes up his appointment in September.

Speaking to CatholicIreland.net, Fr Norris said he saw his role very much as an “anam cara” (soul friend) to the students.

“I like the name ‘anam cara’ – a person who accompanies another on the same holy journey in the adventure of following Christ.”

He said his priority will be to accompany the students in prayer and to live the Christian life better so as to be a “help to other Christians, especially those who are training to be shepherds”.

“Pastors are vital today,” he said. “In the past, tradition and authority told us what to do and to be. But as Pope Paul VI said, ‘Modern men and women listen more readily to witnesses than they do to teachers. And if they do listen to teachers, it is because they are first witnesses.’”

Currently, the Pontifical Irish College has 35 priests and ten seminarians in residence with a fulltime staff of four priests who look after the formation of seminarians in four key areas: human, spiritual, pastoral and intellectual. Seminarians attend the Gregorian, Lateran and Dominican universities to further their studies.

In 2011, Cardinal Timothy Dolan of New York, lead a Visitation Team to the Irish College. In his report on the college, leaked to the Irish Times in June 2012, the Cardinal expressed serious concern about “the atmosphere, structure, staffing and guiding philosophy” of the college and called for “substantial reform”.

While the report had positive comments about the college, overall it was quite negative, and by the time its contents became public, the four permanent staff members of the college had left their positions.

Among the criticisms made in his report, Cardinal Dolan said it was clear that “the staff and students are dramatically divided in their approach to the Church and the priesthood”.

He found an “anti-ecclesial bias” in the college when it came to the theological formation of students, with a leaning towards theologians who are “somewhat ambiguous on Church teaching”.

Fr Norris was not willing to comment on the Visitation report, but said “life goes forward”.

“You have to continually re-find the standards and goals that are appropriate.” He added, “The perception of involved, balanced people was that it [the report] wasn’t a totally satisfactory report.”

Asked about the benefits of seminarians spending time at the Irish College, Fr Norris said that it gave students the opportunity to “discover the unity and universality of the Church”.

Recalling the nine years he spent in Rome, which began during Vatican II, he said it was a “marvellous encounter with the whole of Western culture and Christian culture. We walked in the footsteps of Peter and Paul and the martyrs of the early Church. I understood so much about my heritage as a European, as an Irish man and as a believer.”

As spiritual director, it will be up to Fr Norris to arrange regular retreats, days of recollection and at least one weekly “spiritual conference”.

His wish is that students come to the Irish College having “seriously engaged” with themselves and with questions like ‘Who am I?’; ‘What is the meaning of life?’; ‘Have I made a choice of God as the foundation for my choice of being a priest?’

The other members of the staff at the Irish College are Fr Ciaran O’Carroll, Rector, Fr George Hayes, Vice-Rector, and Fr Hugh Clifford, Director of Formation.