Irish bishops to comment on right to conscientious objection to abortion 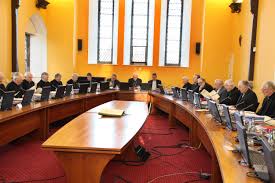 The Irish Catholic Bishops’ Conference is to issue a statement on the right of healthcare professionals to conscientious objection to abortion and to abortion referral.

At the end of its Autumn 2018 General Meeting the Conference stated that later this week, as legislation is brought before the Oireachtas to provide for abortion services, it will make a statement on this issue.

The Autumn 2018 General Meeting of the Irish Catholic Bishops’ Conference, which concluded on Wednesday at the Columba Centre, Saint Patrick’s College, Maynooth, also discussed the decision by the government to hold a referendum on 26 October next to remove the offence of blasphemy from the Constitution of Ireland.

It reaffirmed the position that the current reference to blasphemy in the Constitution, under article 40.6.1.i, is “largely obsolete”, and may give rise to concern because of the way such measures have been used to justify violence and oppression against minorities in other parts of the world.

The bishops stated that the promotion of freedom of religion and the freedom of conscience for all in society greatly enriches the social fabric of a country, and is one aspect of respect for the dignity of human persons. “The human right of faith communities to contribute to public life, including public debate on issues that are of importance to everyone, without being subjected to attack or ridicule, needs to be acknowledged and respected,” they stated.

The bishops also heard from Mr John Morgan, chairperson, and Ms Teresa Devlin, chief executive, of the National Board for Safeguarding Children in the Catholic Church. In the concluding statement the bishops acknowledged what they described as “anger and dismay” of many about reports over the summer concerning the criminal abuse of children and its cover-up in a number of countries.

“Despite the many reports and serious findings on this subject here in Ireland in recent years, these overseas reports were nonetheless shocking. Bishops welcomed the decision of Pope Francis to call the presidents of Bishops’ Conferences to a meeting in Rome next February to review the safeguarding of children in the Church,” they stated.

The bishops also discussed Pope Francis’s ‘Letter to the People of God’ and his words during the Mass at the Phoenix Park about abuse of children when he spoke of “the suffering endured by minors due to sexual abuse, the abuse of power and the abuse of conscience perpetrated by representatives of the Church” and pleaded for forgiveness.

“Bishops discussed the multi-dimensional damage that abuse can cause to an individual, including to her/his relationship with God,” they said in the statement.

The bishops noted that the Synod of Bishops in Rome on Youth, Faith and Vocational Discernment will run from 3 to 28 October. Archbishop Eamon Martin of Armagh, President of the Bishops’ Conference, and Bishop Donal McKeown of Derry, chair of the Council for Pastoral Renewal and Adult Faith Development, are representing the Irish bishops at the Synod.

As part of the preparations for the Synod, bishops met with representatives of youth ministry from around the country to discuss key themes arising from a web-based consultation they undertook with young people. This involved feedback from 2,500 respondents.

Two of its findings were that while young people face many challenges, including peer pressure, mental health issues and social media, they have also had positive experiences of chaplaincy services, pilgrimages and other dedicated national and international youth encounter events.