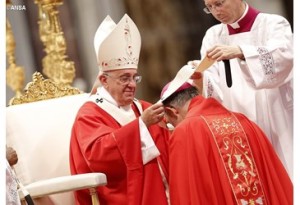 Archbishops Eamon Martin and Kieran O’Reilly will be among the 46 newly appointed archbishops who will receive the pallium from Pope Francis on Monday after he blesses their vestments during Mass for the Feast of Sts Peter and Paul (29 June).

The Apostolic Nuncio to Ireland, Archbishop Charles Brown, will formally vest both archbishops with the pallium in their respective archdiocese in the coming weeks.

This is in keeping with a new policy established by Pope Francis which requires each archbishop to be vested with the pallium in their own archdiocese by the apostolic nuncio.

Mgr Guido Marini, the papal master of liturgical ceremonies, explained in a letter to new archbishops that Pope Francis believes this would “greatly favour the participation of the local Church.”

The two Irish prelates will receive the pallium privately from the Pontiff after the Mass on Monday.

The pallium is a white woollen strip, worn around the neck in liturgical functions, symbolising the union between a metropolitan archbishop and the Bishop of Rome.

For years, each new archbishop had received his pallium directly from the Pontiff, during Mass on the patronal feast of the Church of Rome.

Along with Archbishop Martin and O’Reilly, other archbishops who will received the pallium on Monday include two cardinals, Rainer Maria Woelki of Cologne and Antonio Canizares Llovera of Valencia, as well as Archbishops Blaise Cupich of Chicago, John Wester of Santa Fe, and Anthony Fisher of Sydney, Australia.

Archbishop Brown will conduct the investiture in the presence of representatives of the nine dioceses of the ecclesiastical province of Armagh: Ardagh & Clonmacnoise, Clogher, Derry, Down & Connor, Dromore, Meath, Raphoe and Armagh itself.

Archbishop Kieran O’Reilly’s investiture will take place on a date in the early autumn.

The wearing of the pallium dates back to the fourth century, and predates the mitre and the crozier as episcopal symbols.

The pallium is a woollen band, about three inches wide, and has a fourteen-inch strip hanging down the front and the back, which are tipped with black silk to recall the dark hoof of the sheep the archbishop is symbolically carrying over his shoulders.

St John Paul II first placed the woollen bands around the shoulders of metropolitan archbishops at Mass on the Feast day of Saints Peter and Paul on 29 June 1983.

An ancient tradition, dating back probably at least to the sixth century, it involves the Pope blessing the pallium and concedes its use by certain bishops.

The current Code of Canon Law stipulates that within three months of their appointment or consecration all metropolitan archbishops must request a pallium from the pope.