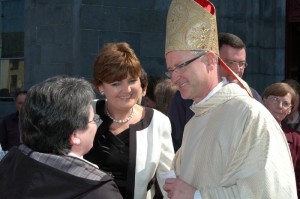 The announcement was made on Saturday.

The prelate, who was born in Scariff, has been serving as nuncio to Madagascar, the Commorros and Mauritius since 13 February 2010.

A priest of the diocese of Killaloe, Archbishop Nugent holds a doctorate in canon law.

He studied for the priesthood in St Patrick’s College Maynooth where he received a BA in Celtic Studies.

Fr Nugent was ordained a priest on 9 July 1983 and incardinated in the diocese of Killaloe and completed a Licentiate in Canon Law after ordination.

He was then appointed as a curate in Ennis and ministered in the parish from 1984 to 1987.

From 1988 until 1991, he worked at the Vatican at the General Affairs of the Secretariat of the State.

In 1992, he completed his doctorate in canon law at the Gregorian University. In the same year, he graduated from the Pontifical Ecclesiastical Academy and entered the diplomatic service of the Holy See on 1 July 1992.

Fr Nugent then worked in the papal diplomatic missions in Turkey, Jerusalem and the Philippines.

During this time he had responsibility for communications between the Chinese dioceses and the Vatican.

Among those present were representatives of the Holy See, bishops and episcopal conferences, as well as charitable and religious organisations.

The two-day conference, entitled ‘The Communion of the Church: Memory and Hope for Haiti, 5 Years after the Earthquake’ sought to place a spotlight on continuing reconstruction efforts on the island.

In his address, Pope Francis said, “Through the help given to our brothers and sisters in Haiti, we have shown that the Church is a great body, one in which the various members care for one another. It is in this communion, prompted by the Holy Spirit, that our charitable service finds its deepest motivation.”

Of the rebuilding efforts, the Pope explained that what needs to be done “rests on three solid pillars: the human person, ecclesial communion, and the local Church.”

The person, he said, is at the centre of the Church’s activities, thus ensuring that material needs are met in order to help Haitians to “further their own spiritual and religious lives.”

“In this phase of reconstruction, humanitarian and pastoral activities are not in competition with one another, but rather are complementary: each needs the other, and together they help Haitians to be mature persons and Christians capable of devoting themselves to the good of their brothers and sisters,” the Pope said.