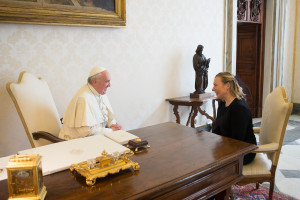 Ireland’s new Ambassador to the Holy See presented her letters of credentials to Pope Francis in the Vatican on Tuesday.

The Pope and Ambassador Emma Madigan had a private conversation and according to the Department of Foreign Affairs, the Ambassador updated the Pontiff on developments in Ireland, including the recent talks in Northern Ireland.

The Ambassador spoke to the Pope about the importance Ireland attaches to promoting sustainable development, as well as promoting economic growth that is inclusive.

She told him that combating poverty and reducing hunger are key priorities of the Irish Government, with a particular focus on under-nutrition, which is a serious health and economic issue and can have a detrimental impact on the well-being and potential of families, communities and countries.

Ambassador Madigan also referred to the fact that Ireland is currently reviewing its broader foreign policy goals with a view to helping to achieve a world that is just, fair and stable and the protection of human rights, dignity and security.

The Ambassador said that she was looking forward to exploring areas of common interest with the Holy See and “looking for ways we can discuss and work together on things that are important to both of us”.

In this context, she underlined that Ireland is a strong advocate for the freedom of religion or belief.

The persecution of members of religious minorities, including Christians, in several parts of the world is a matter of serious concern to the Irish Government. Each person is entitled to have their religious identity respected, she said.

The Ambassador also expressed the hope that the Pope might visit Ireland in the future.

She said that while such an invitation would come from the Church authorities, if the Pope did accept, the Government would do everything it could to make the visit a success. 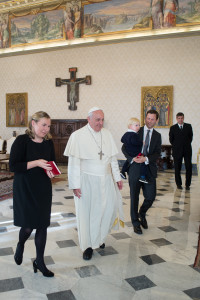 After presenting her letters of credence to Pope Francis, the Ambassador introduced her husband Laurence Simms, who is also a diplomat with the Department of Foreign Affairs, and her son, Cormac to the Pope.

Following the Papal audience, she met the Vatican’s Secretary of State Cardinal Pietro Parolin and then paid a visit to St Peter’s Basilica.

The Government shut Ireland’s embassy to the Holy See in November 2011.

The announcement was made by the Tánaiste at the time, Eamon Gilmore, who said the decision followed a review of overseas missions, with “particular attention to the economic return from bilateral missions”.

Mr Gilmore underlined that in the Government’s view, the Vatican embassy yielded no economic return.

The decision to close the embassy followed fraught relations between the State and the Holy See in the wake of the publication of the Cloyne Report.

The findings prompted the Taoiseach Enda Kenny to claim the Report “exposed the dysfunction, disconnection, elitism and narcissism” in the Vatican.

The re-opening of a diplomatic mission was announced in January 2014, though the Government said it would be a scaled-down mission.

Emma Madigan has served in the Department of Foreign Affairs and Trade for 14 years. She has a degree in History and Italian and a Masters in European Studies from UCD.

Her assignments in DFAT have included Vice Consul in New York, Private Secretary to the Secretary General and Deputy Director of Europe & UN Coordination Section.

Prior to taking up her current position, she held the position of Assistant Chief of Protocol, where she was heavily involved in the preparation and delivery of high-level visits into and out of Ireland, including during Ireland’s Presidency of the European Union, the hosting of the OSCE Ministerial Council and, earlier this year, the State Visit of President Higgins to the United Kingdom.