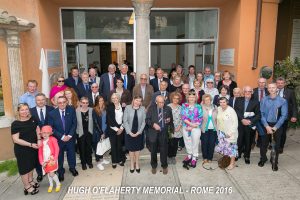 The Irish Ambassador to the Holy See has paid tribute to Irish missionaries working today in situations of crisis and conflict around the world.

Ambassador Emma Madigan compared missionaries’ commitment to the tradition of Mgr Hugh O’Flaherty because like him they are “not walking away from conflict, but stepping towards it, to help the most vulnerable, at the time of their greatest need.”

Ahead of the unveiling of a plaque in honour of Mgr O’Flaherty in the German College last weekend, the Ambassador hosted the inaugural Mgr Hugh O’Flaherty lecture.

Entitled ‘Walking a fine line: helping the most vulnerable in times of war’, the two main speakers were Irish missionaries Fr Michael Kilkenny, CSSp who spent 10 years in Angola 1985-1995 and Sr Elizabeth Ryan, fcJ who was based in South Sudan from 2008-2013.

Ambassador Madigan told CatholicIreland.net, “I asked them to speak about their experiences because I thought it would be an excellent way to honour Monsignor O’Flaherty’s legacy by also remembering and celebrating the humanitarian work that Irish missionaries do in and around conflicts that are often forgotten today, such as South Sudan.”

She quoted Pope Francis who said there are people who, “do not grow accustomed to evil. Who defeat it with good.”

Last Tuesday, the characteristics of missionaries was the focus of the Pope’s homily at his morning Mass celebrated in the Santa Marta residence.

“Our missionaries, these evangelisation heroes of our times…. Europe who filled up other continents with missionaries…. And these people went there without ever returning home….  I think it is only right that we give thanks to the Lord for their testimony. It’s right that we rejoice for having these missionaries who are true witnesses,” Pope Francis said to his congregation.

Pope Francis went on to describe how a missionary sets out without knowing what awaits him or her and he mentioned in this context the final farewell given by St Francis Xavier on his deathbed.

“I’m wondering what the final moment on earth was like for these people: how did they bid farewell? Like Xaxier: ‘I left everything but it was worth it!’ They passed away, nameless. They were martyrs who offered up their lives for the Gospel. These missionaries are our glory! The glory of our Church!”