IEC2012 covered costs and made a surplus bishop confirms 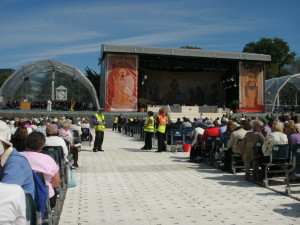 The 50th International Eucharistic Congress which was held in Ireland last year has not only been paid for in full but has managed to generate a surplus of almost €40,000.

The finalised accounts which have been lodged with the Companies Office show that IEC2012 cost a total of €9.5m and there was a surplus of €38,057. This will be put towards a future National Eucharistic Congress.

A further 25% came from benefactors in Ireland and elsewhere, from religious orders and congregations and from Catholic Bishops’ Conferences worldwide.

The remaining 30% came from operational income generated during the Congress.

“We take this opportunity to acknowledge the kindness of all the support which the Congress received from various sources, especially during this time of severe economic hardship,” said Bishop John Fleming of Killala, Chairman of the Finance and General Purposes Fund of the Irish Catholic Bishops’ Conference, said on behalf of the Irish bishops.

“We are particularly grateful to the people of every parish throughout the country who contributed so generously to the Congress over a four year period.”

Donations from individuals, organisations, and religious, as well as from Catholic Bishops’ Conferences worldwide, were an expression of solidarity which was “both humbling and greatly appreciated,” Bishop Fleming said.

He also thanked the 1,700 volunteers who “enriched the Congress with their faith and talents”.

Thanks also went to those who provided family-based accommodation, meals and transport for over 200 pilgrims who needed support in order to attend.

Bishop Fleming paid tribute to the Secretary General of the Congress, Fr Kevin Doran, and all the committees and staff involved in the national organisation as well as those involved in the 26 Irish dioceses.

“We reiterate the words of Pope Emeritus Benedict XVI broadcast to the faithful on 17 June 2012 at the Statio Orbis (closing liturgy) in Croke Park in Dublin, ‘I pray that the Congress will be for each of you a spiritually fruitful experience of communion with Christ and his Church,'” Bishop Flemming concluded.

Daily attendances at the 50th  International Eucharistic Congress 2012 in the RDS, Dublin, reached between 10,000 and 16,000 while 65,000 participated in the closing liturgy at Croke Park.

Total attendance over the course of the week was approximately 150,000.  Some 7,000 overseas pilgrims participated during Congress week, representing more than 114 different countries.

Money has already been donated to the 51st International Eucharistic Congress, which is due to take place in Cebu in the Philippines in 25-31 January 2016. This will help pilgrims with limited financial means to attend.

Ireland has begun to prepare for this next International Eucharistic Congress. Anne Griffin (General Manager of IEC2012) is currently giving a month of her time on a voluntary basis to work with the local organising committees in Manila and Cebu.

A number of Irish travel agencies have now begun to look at putting together travel packages for Cebu 2016, including the possibility of a second destination in the Far East or Australia.

It is also hoped that there will be a pastoral preparation programme for pilgrims, based on the theme of the 2016 International Congress.

In June 2013, Pope Francis approved the date and theme of the 51st Congress – “Christ in you, our hope of glory”.

The Catholic Bishops Conference of the Philippines has expressed its desire that the forthcoming congress will deepen Eucharistic devotion in the country as well as prepare for the 500th anniversary of the evangelisation in the Philippines.

“The celebration of the 51st International Eucharistic Congress in this country, the only one with a Catholic majority in Asia, is an important challenge to strengthen the missionary/evangelising perspective as well as for identifying new ways in celebrating the congresses themselves,” a communique from the Pontifical Commission for International Eucharistic Congresses stated.