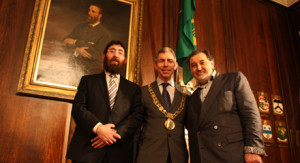 A recent invitation from the Jewish community to the leaders of the Christian Churches in Ireland has been praised for “building bridges” and as “another significant step” in inter-faith relations.

Rabbi Zalman Lent and the Dublin Hebrew Congregation were joined by a number of international visitors who had returned to Ireland for the Irish Jewish Gathering, including Rabbi David Rosen, a former Chief Rabbi of Ireland and pioneer of inter-faith dialogue.

More than 100 either first or second generation members of the Irish Jewish diaspora from Australia, America, Canada, South Africa, the UK, Denmark and Israel, returned to Dublin for the eight day Irish Jewish Gathering at the end of July.

It was hosted by the Jewish Representative Council, chaired by Mr Maurice Cohen, as part of the year-long Government-backed Gathering 2013.

The programme of events was specially tailored for both the local Jewish communities and Jewish Irish emigrants now living abroad. The intention was to celebrate the unique cultural heritage of being both Irish and Jewish.

According to the 2011 census, there are 1,984 Jewish people in Ireland, mostly in Dublin.

Historian and genealogist, Stuart Rosenblatt, believes there is documentary evidence of about 50,000 Irish Jewish people around the world.

One of the highlights of the week was the ‘Walking Tour of Little Jerusalem’ in Dublin led by Pat Liddy.

The culmination of the week-long Jewish Gathering was the Friday evening Shabbat service.

In a statement, Dr Susan Hood of the Church of Ireland said, “In terms of relationship building and new understandings between people who are different, not least members of the different faiths in Ireland, as elsewhere, it is often the things unseen rather than those in the limelight that can have unmeasured significance.”

Following the service in the Shul, all the invitees proceeded to the Samuel Tacca Hall for the weekly Shabbat meal where the Service of Kiddush (grace before meals) was said before the shared food was enjoyed by all.

According to Dr Hood, it was “a moving occasion, at which Dr Rosen spoke about the ever closer relations that have developed between Christians and Jews over the past 30 years since he had been Chief Rabbi in Ireland.”

He said it was a particular honour for the community to demonstrate the high regard with which they are held by the main Christian Churches in Ireland.

Rabbi Rosen made specific reference to the international dialogues with Anglicans and Roman Catholics and their importance in contemporary Jewish self-understanding.

Church of Ireland Archbishop of Dublin, Dr Michael Jackson, co-chairs the Anglican-Jewish Commission on behalf of the Archbishop of Canterbury.

“After sundown, in accordance with Jewish traditions, no machinery or devices may be worked, and so the historic event was not captured on film, but history was most certainly made with the collective presence of the Christian representatives in the Shul, which has never happened before in Ireland,” Dr Hood explained.

In May 2008, during the Irish Church leaders visit to the Holy Land, Cardinal Brady, Revd Finlay, the then Archbishop of Armagh, the Most Revd Alan Harper, and Revd Roy Cooper, then President of the Methodist Church, attended Friday prayers at the Kehilat Kol HaNeshama Synagogue in Jerusalem and afterwards shared a meal together in the home of Rabbi Levi Weiman-Kelman and his family.

In 2010, the Jewish, Muslim and Christian leaders of Ireland held a day of dialogue at Farmleigh House, during which they were hosted for a shared meal at Aras an Uachtarain by the then President, Mary McAleese.

“The recent invitation of the Jewish community to the leaders of the Churches and the resulting quiet and humble encounter that took place in Dublin recently was another significant step along the road of building bridges,” Dr Hood commented.