Home > News > Indifference represents a menace to the human family

Indifference represents a menace to the human family

Friday was World Day of Peace, the third in the papacy of Pope Francis.

In his message to mark the day, the Pope warned that indifference in regard to the scourges of our time is one of the fundamental causes of a lack of peace.

In the Jubilee Year of Mercy, he appealed to Christians and all people to make mercy a way of life and work concretely to improve the world around us.

God is not indifferent, the Pope began his message.

Peace is God’s gift and a human achievement but sadly war and terrorism marked last year from beginning to end.

A real “third world war fought piecemeal” took place in some regions although there were positive signs too, like the conference on climate change in Paris.

With the Jubilee of Mercy, the Pope said, “I want to invite the Church to pray and work so that Christians will have humble and compassionate hearts,” to “forgive and give” and become more open to people on fringes.

Mankind has the capacity to act together which is rooted in “our fundamental vocation to fraternity and a life in common”.

We are related to our brothers and sisters “for whom we are responsible and with whom we act in solidarity”. Lacking this relationship, we would be less human, he said. “We see, then, how indifference represents a menace to the human family.”

Indifference has always been present, but the modern world has produced a “globalisation of indifference”.

“We have come to think that we are the source and creator of ourselves, our lives and society,” and as a consequence “we feel that we owe nothing to anyone but ourselves, and we claim only rights”.

Indifference shows itself in different ways. People can be up to date on current affairs but “without engagement” and with “no sense of involvement or compassion”.

Sadly “today’s information explosion does not of itself lead to an increased concern for other people’s problems”.

There are those who simply content themselves with blaming the poor and the poor countries themselves for their troubles and “all this becomes even more exasperating for the marginalised in the light of the widespread and deeply rooted corruption found in many countries”.

In other cases indifference shows itself in lack of concern for what is happening around us. People “lead lives of comfort, deaf to the cry of those who suffer. Almost imperceptibly, we grow incapable of feeling compassion for others and for their problems”.

The destruction of the natural environment is also the result of indifference. This lack of engagement can prolong situations of injustice and social imbalance leading to conflicts.

At the institutional level, “indifference to others can foster and even justify actions and policies which ultimately represent threats to peace” and  lead to justifying “deplorable economic policies which breed injustice”.

Indifference to the natural environment ends up “creating new forms of poverty and new situations of injustice, often with dire consequences for security and peace”.

God has intervened in history to remind people of their responsibilities to each other. In Jesus his Son, “God has come down among us. He took flesh and showed his solidarity with humanity in all things but sin”.

Our judgement will be based on love for others – the sick, poor, prisoners. This then is why “it is absolutely essential for the Church and for the credibility of her message that she herself live and testify to mercy,” writes Pope Francis.

“Consequently, wherever the Church is present, the mercy of the Father must be evident. In our parishes, communities, associations and movements, in a word, wherever there are Christians, everyone should find an oasis of mercy.”

Families, teachers and communicators help build a culture of solidarity and mercy which can overcome indifference, said the pope and he praised the positive initiatives of non-governmental and charitable organisations, journalists and photographers who defend human rights. 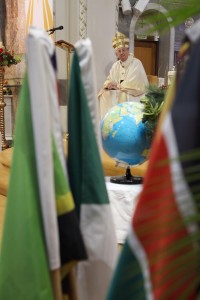 Archbishop Diarmuid Martin at the 2016 World Day of Prayer For Peace Mass in the Church of Our Lady of Perpetual Succour in Foxrock Dublin. Pic John Mc Elroy.

He extended special thanks to the “individuals, families, parishes, religious communities, monasteries and shrines who readily responded to my appeal to welcome a refugee family”.

All people should realise how indifference can manifest itself  and work concretely to improve the world around them.

He called on civil leaders to improve the lot of prisoners, to abolish death penalty and review legislation on migrants, to “reflect a readiness to welcome migrants and to facilitate their integration”.

He ended his message with a “threefold appeal to the leaders of nations”: to “refrain from drawing other peoples into conflicts or wars which destroy not only their material, cultural and social legacy, but also – and in the long term – their moral and spiritual integrity.”

The Pontiff also appealed to the leaders of nations to forgive or manage in a sustainable way the international debt of the poorer nations; and to adopt policies of cooperation which, instead of bowing before the dictatorship of certain ideologies, “will respect the values of local populations and, in any case, not prove detrimental to the fundamental and inalienable right to life of the unborn.”

A Mass for World Day of Peace 2016 was celebrated in the archdiocese of Dublin on Friday at a special Mass in Our Lady of Perpetual Succour, Foxrock.