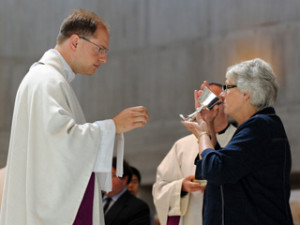 Disagreements have arisen between Church leaders in Kerala over the use of Communion wine, as the state prepares to impose a ban on alcohol consumption.

“Churches should think about using grape water, as had been the practice in the past, instead of wine,” Bishop Philiphose Mar Chrysostom of the indigenous Mar Thoma Syrian Church told ucanews.com.

Unlike the Latin Rite Catholic Church, his faith does not believe that the bread and wine offered at Mass turn to the body and blood of Christ, but are merely symbols of the sacrament.

But Latin Rite Catholic Archbishop Francis Kallarackal of Verapoly said Christians would not be able “to think of the Holy Mass without bread and wine”.

The use of bread and wine as the body and blood of Jesus “will remain unchanged until the world ends,” he said.

Fr Paul Thelakkat, spokesman for the Syro-Malabar Catholic Church in Kerala dismissed the controversy, saying the ban would have no impact on the way the Church dispenses the sacraments.

“Every faith has its own traditions and practices. Using wine at Mass is a global practice. Its use is minimum and based on a faith. Combining the liquor ban and Mass wine issue together is an attempt communalise the issue by dragging in the Church,” Fr Thelakkat told ucanews.com.

Kerala authorities earlier this month announced a plan to phase out alcohol sales over a 10-year period.

Beginning next year, bar licenses will only be issued to five-star hotels, while many of the state’s 720 bars and restaurants will not have their licenses renewed.

The debate has now extended outside Church circles.

“All are equal before law. If the government has decided to issue no licenses for liquor manufacturing, sale or use, then the Catholic Church cannot be an exception,” he told ucanews.com on Wednesday.

Shortly after the ban was announced, Natesan told local media, “Jesus turned water into wine. Today, nobody has the power to convert water into wine. Then why don’t churches use water and consider it as wine?”

He also alleged that some churches were selling Mass wine, in violation of Indian law.

“I know that even the churches are selling wine for a price. They are not supposed to sell Mass wine. But no action was taken against them,” he said.

Anil Xavier, state excise commissioner, told ucanews.com that licenses were issued to Church organizations under the Cochin Mass Wine Act that permits the license holder to make wine that is used for Mass. ”

It is not meant for sale and the license holders must pay a tax of three Indian rupees per litre produced in their winery,” he said.