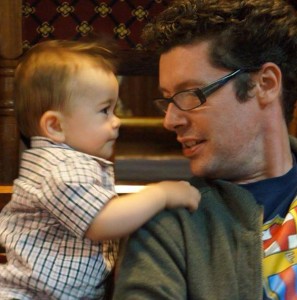 Around 500 friends and colleagues of the slain Catholic journalist and researcher, Tom O’Gorman, gathered in St Teresa’s Church in Clarendon Street, in the heart of Dublin city on Tuesday night (14th January).

The candlelit atmosphere was muted. Horror at the ‘unspeakable’ way in which Tom had been robbed of his life, still held those present in its grip. There were tears, but not many. Many people were still feeling too numb for tears.

After an opening hymn, Amazing Grace, Fr Stephen Kelly, a good friend of Tom’s and a curate in St Mary’s parish in Navan, introduced the vigil.

“We need to be with other people who knew and loved Tom,” he told the congregation which included colleagues of Tom from the world of journalism, friends from Christian movements like the Focolare of which Tom was a member, and friends from the Pro Life and other campaigns that Tom had supported.

Tom’s faith was real, Fr Kelly said. “His love of Jesus was the foundation of the life he lived and the inspiration behind everything he sought to achieve.” 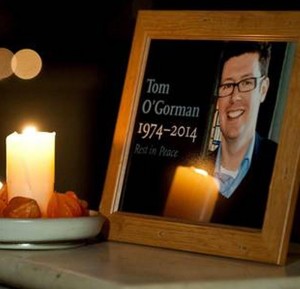 Fr Kelly told the hushed congregation that it was necessary to be reminded of the reality of faith – that as Christians we believe in salvation, resurrection and life eternal in Paradise.

“We come to this church not to canonise Tom, he said, but to pray for his soul.

“We believe in the reality of human sin,” he continued “Tom believed in sin and I know that, not because he pointed out the sins of others or judged others, I know that because so often I met him at the entrance to this church as he came from or went to confession.”

He continued: “My friends, we believe in forgiveness that’s a reality we can’t avoid tonight and we pray that the Lord may give us that strength to forgive just as he prayed for the forgiveness of those who crucified Him, as they crucified him without showing any sign of remorse. Lord give us that grace.”

The vigil was organised by a number of Tom’s friends from the Iona Institute (where he worked as a researcher) and the Pro Life campaign and revolved around Eucharistic Adoration, the rosary, and prayers of intercession all based on the Beatitudes interspersed with music, provided by a group called ‘Night Fever’ that Tom also supported.

On a regular basis, the group invite young people to come in from the nearby streets to pray in Clarendon Street Church.

At the end of the vigil, Dr Joseph McCarroll, chairman of the PLC and Tom’s close friend, addressed the church.

He said friends owed Tom a debt of gratitude. “But another thing also has brought us here together this evening, something harder to speak of. We want to remember Tom and send him Home with good prayers, but we are full of horror.”

“The unspeakable circumstances of his death and the added violation of his memory by the indecent coverage are making it hard for us to grieve for Tom.”

One of those tasked with breaking the news of Tom’s death, described how he could not “utter the words, they were, quite simply, unspeakable”.

He went on: “We needed to come together this evening to find a word that can get us through these circumstances so we can face and feel our grief at losing Tom. And that’s why we are here, here in the presence, the Eucharistic Presence, of that Word.”

Describing Tom as a “people person, par excellence”, Dr McCarroll said the “heart of Tom’s life’s mission was “doing good in simple one-to-one ways, meeting people and lighting up their lives with his interest in them as individuals.”

Three personal qualities helped him do this, said Dr McCarroll – his vulnerability – he had himself been through suffering and was therefore sensitive to the suffering of others; his love for social issues and thirdly, his sense of humour.

At a meeting with a small group of which Tom and Joe McCarroll were part,  Tom recently chose to speak on how Jesus’ last cry on the Cross helped him deal with suffering.

“This is the core experience, insight and practice of the Focolare spirituality, meeting Jesus Forsaken in each suffering, seeing that experience in unity with His cry of abandonment from the Cross, ‘My God, My God, why have you forsaken me?’ I remember how Tom struggled to put into words what can scarcely be expressed.”

“But from that last talk of Tom’s, ever since I heard the news of his tragic death, one sentence keeps ringing in my mind – Tom said Jesus said, ‘Forgive them Father, for they know not what they do’. Isn’t this a word from Tom for us right now, the word which his Eucharistic Lord, gave us to help us make sense of our suffering, even that of a violent death.”

Tributes to Tom O’Gorman continue to flow onto his Facebook page, while friends in Washington where he worked on a number of political campaigns, are organising a memorial service for him.

Meanwhile, Saverio Bellante, the Italian charged with Tom O’Gorman’s murder, has been transferred to the Central Mental Hospital. He is due to appear before the courts once more today.