“Suffering of this scale can’t be allowed to continue” 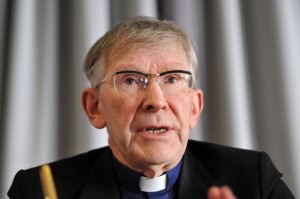 The world has been deaf for too long to the crises in Syria and Iraq, the Bishop of Cork and Ross has said as he welcomed the Government’s indication that it will accept more refugees.

Bishop John Buckley said the current refugee crisis is one which requires “immediate and decisive attention” and he warned that “Human suffering of this scale cannot be allowed to continue”.

However, Dr Buckley acknowledged that it will not be easy to achieve a lasting solution to this crisis.

Complex political problems, regional instability and economic crises, much less the civil war in Syria for the past few years all point to the difficulties involved.

However, he emphasised that the scenes witnessed in recent days “have made us all realise that there are human faces behind every conflict and has also alerted us to the possibility that we can become immune to human suffering”.

Welcoming the Government’s willingness to accept more refugees, he said all countries share that responsibility, including the wealthier oil-producing countries in the Middle East.

A “greater effort will also have to be made to achieving a lasting peace in an extremely troubled region” as the world has become deaf for too long to the crises in Syria and Iraq where whole towns have been laid bare, whole communities have been exiled and too many have died because of their Christian faith.

Our faith teaches that we are all made in the image and likeness of God. That realisation alone must stir the hearts and minds of every Christian, he said.

On Monday, Archbishop Diarmuid Martin of Dublin announced that the staff of Crosscare, the catholic social care agency in his diocese, has begun working on a draft programme of support for refugees.

In an interview last Thursday on RTE, Archbishop Martin said planning for the reception of refugees should begin immediately in what he called “the greatest refugee crisis since the Second World War”.

Over the weekend Crosscare staff, with expertise in housing and in working with refugees, were working on how they can be ready to respond quickly when government agencies confirm the numbers that Ireland can expect to receive.

Crosscare Director Conor Hickey said that following Archbishop Martin’s appeal last Thursday for an immediate response, they started work on a plan which could see Crosscare staff, including housing experts and interpreters, assigned specifically to helping with the intake of refugees.

He said they hoped to work closely with State agencies as soon as Government confirmed their plans.

Crosscare is one the leading providers of support and accommodation to homeless people in Dublin. It also works directly with refugees and asylum seekers arriving in Dublin through the Crosscare Migrant Project.

Meanwhile, the Bishop of Down and Connor has also called on political leaders and Christians to provide a “generous reception” for refugees.

In a statement made at Mass on Sunday in Mater Dei Church in Crumlin, Co Antrim, Bishop Noel Treanor said an adequate humanitarian response must be put in place for those who have reached European shores and borders.

“This moment in our national and European history, germinating with so much loss of life, human trafficking, destruction of families, suffering, hunger, tragedy and loss of all kinds, demands that as individual persons and as a state and society, we do not surrender to what Pope Francis referred to as ‘the globalisation of indifference’,” the bishop said.

Dr Treanor added that the “initial wave of good will” shown to refugees must be followed by sustained programmes and civic initiatives designed to integrate these new neighbours.