Home > Featured > “Human life is the most fundamental right of all” 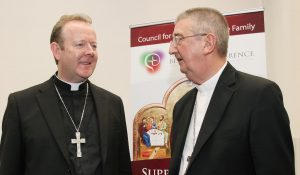 Archbishop Eamon Martin of Armagh has said human life is the most fundamental right of all and that the Irish Church will therefore continue to offer its perspective on the issue of abortion in the debate in Ireland and Northern Ireland.

Speaking to media at the official launch of the World Meeting of Families at St Patrick’s College Drumcondra on 22 October, the Archbishop was asked about his recent comments on the Eighth Amendment and his suggestion that politicians should not leave their faith at the door on this issue.

“What I was calling for … was really an opportunity for everyone to speak – to be heard – to be listened to. There are many people who feel very strongly about this issue and I think it is very important that we hear and listen to that,” he said.

The Primate of All Ireland said that for him and for the Church, “human life is the most fundamental right of all” and that the Church would “try to speak about that in a tender and loving and compassionate way and also reach out to those who are in great pain – perhaps even in crisis over this issue.”

The President of the World Meeting of Families 2018 (WMF2018), Archbishop Diarmuid Martin, told reporters that the question of the right to life “is a fundamental issue for the Church, not just in Ireland but everywhere.”

He stressed that the Church “is not going to change its position on that” and that within the normal dialogue in a democratic society every individual and every grouping has a right to express itself.

Of WMF2018, the Archbishop of Dublin said it would not just be a big international gathering but would also be a process. “It is a way to see how we can reflect together to enhance family life in the Church and society in Ireland.”

Archbishop Eamon Martin described WMF2018 as one of the big events in the life of the Catholic Church universally and a “great gift”.

“We expect people to be coming from all over the world bringing their perspective on the challenges and the joy of family life.”

He said the Irish Church was beginning a process that would lead it through the next 20 months to the celebration of the WMF and beyond. “We are hoping that there will be a legacy from this event – our thought in celebrating the joy of family life is that it will continue to flourish here in Ireland”.

He said he believed it was important in preparing for the WMF2018 that an opportunity was given to talk about what people believe to be the challenges to the family and what we believe are the positives and the joys of family life.

Referring to a catechetical programme that will be rolled out next spring, the Archbishop said that what was being prepared “really is an opportunity for people at ground level in families, in schools and in homes and parishes to engage with what Pope Francis has said about the family in ‘The Joy of Love’ – his exhortation following the synod.”

“We’re hoping to unpack that wonderful exhortation over the course of the next 20 months and allow people at various levels and in various situations to engage with it.”

The Archbishop of Armagh said he had met a lot of young people in recent weeks and they had raised the issues of homelessness, addiction and refugees.

“I was amazed at their compassion and their desire to try to find ways of reaching out to the people who are less fortunate than many of them. They are looking to the Church and to society to see what can we do to try to make Ireland a better, more prosperous and more special place to bring up children and families.”