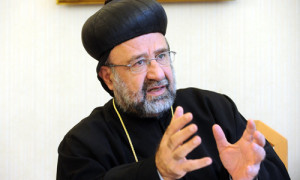 The apostolic nuncio in Syria has indicated it is becoming more difficult to be hopeful that two kidnapped bishops and Italian Jesuit are still alive.

Archbishop Mario Zenari, who is based in the Syrian capital Damascus, told the AsiaNews service that there was still no news about Orthodox Metropolitans Boulos Yazigi (Orthodox Church of Antioch) and Gregorios Youhanna Ibrahim (Syrian Orthodox Church), who were kidnapped in April 2013 or about Fr Paolo Dall’Oglio, an Italian missionary who has been missing since July of the same year.

“Over time, time fears mount” for the fate of the bishops and priests kidnapped in Syria, Archbishop Mario Zenari said. But he added, “Who can say that the door is closed?”

He said that hope of their release remains, although the passing of every week and month “makes this more difficult.”

The archbishop said at least 20,000 people including lay people and religious, bishops, Christians and Muslims, Syrians and foreigners, including journalists, are missing in Syria today after four years of conflict.

The Orthodox Church has again appealed to the international community to lend greater commitment to discovering the fate of two bishops who were kidnapped in the city of Aleppo, two years ago.

Fr Paolo Dall’Oglio, an Italian-born Jesuit, was kidnapped on 29 July 2013.

Two other priests were kidnapped, along with several lay volunteers, including two Italian women in their early twenties who were released in January.

Last year, militants kidnapped a group of 13 nuns north of Damascus but released them a few months later in a prisoner exchange.

Two ecumenical prayer meetings were held in Syria and Lebanon at the weekend for the release of kidnapped priests and bishops.

Syrian Orthodox Church of Antioch Patriarch, Yohanna Yazigi, a brother of one of the two kidnapped bishops, expressed his hope that the two prelates are still alive, even though “the world remains silent” and “no one has provided tangible evidence” of their fate.

He explained, “We have tried to negotiate with anyone who could help us in this matter but unfortunately there is total silence.”

Speaking to AsiaNews, the apostolic nuncio in Syria confirmed that the fate of the hostages, “is unknown”.

“We prayed in Damascus” he said but added that “the more time passes, the more a climate of distrust and fear increases among people”.

Since the beginning of the uprising against Syrian President Bashar al Assad in 2011, more than 3.2 million people have fled the country whilst another 7.6 million have become internally displaced.

At least 200,000 people have been killed in the fighting, many of them civilians. Last year was the worse in terms of casualties.