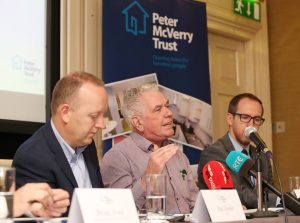 Every month for the last four years the number of homeless people has risen, so Ireland needs to call this an “emergency”, Fr Peter McVerry has stated.

Speaking at the launch of the Peter McVerry Trust’s Pre-Budget Submission, he stated that in the next three to four years Ireland will have “a catastrophe in housing” unless something is done.

Social housing under the control of local authorities is urgently needed. In 1985 Ireland built 6,900 social houses, compared with 75 social houses in 2015.

Given that Budget 2018 will be announced on World Homeless Day, the Peter McVerry Trust is calling on the government to prioritise the needs of people in homelessness. The charity has published a 12-point submission, with emphasis on providing housing . 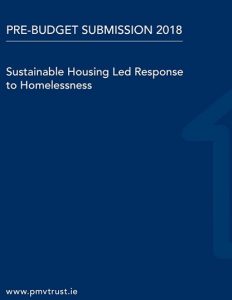 Pat Doyle, CEO, Peter McVerry Trust said at the launch of its Pre-Budget Submission on Tuesday 29 August that “Increased provision of affordable and social housing is the only way to deal with the current homelessness crisis in an effective and sustainable way. The need to deliver large volumes of affordable and social housing stock is the housing issue that requires immediate government attention and increased investment.”

He added that if the current rate of people becoming homeless continues there will be 8,300 people living in homeless accommodation when the Minister for Finance and Public Expenditure Paschal Donohoe announces details of Budget 2018 in the Dáil chamber on 10 October.

“There are steps that the government can take to ensure this figure doesn’t grow any further. These include restoring social welfare payment rates for those aged under 26, and ensuring that adequate levels of housing and support services are made available to those who are exiting State care and in danger of becoming homeless,” said Pat Doyle.

Peter McVerry Trust also repeated its longstanding call for the government to introduce an empty homes tax, because financial incentives to bring vacant properties back into use are not working. Very few property owners signed up to the Repair and Leasing scheme. The Trust has a new proposal that previously vacant and derelict properties, which are sold to housing associations, should be exempt from Property Gains Tax.

Pat Doyle concluded that Budget 2018 must offer additional funds to ensure there is “an unrelenting” battle to end the housing and homeless crisis.

The Peter McVerry Trust Pre-Budget Submission 2018 proposes: expanding the State funded Housing First Programme to all counties outside of Dublin; supporting and funding local authorities to build affordable and social housing for buying and letting and not depending on the private rental market; tackling the rising number of young people becoming homeless and funding mental health care and education; restoring welfare payments for under 26s; introducing an empty homes tax; offering a temporary exemption on Capital Gains Tax for empty homes; linking and increasing Housing Assistance Payment rates to cost of renting; adding 1–2 bed units to the Rapid Build Housing plan; reforming and enlarging the Capital Assistance Scheme; amending the Repair and Lease Scheme and increasing rental income; increasing funding and access to drug and addiction treatment; and increasing aftercare housing for those recovering from drug addiction.