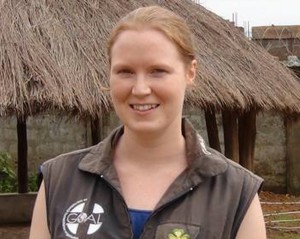 The death toll from the Ebola epidemic continues to rise.

According to WHO, Sierra Leone recorded 537 new Ebola cases in the week to 30 November against 385 the previous week.

“Transmission remains persistent and intense across the country with the exception of the south,” WHO said in a statement, adding that the capital Freetown accounted for 202 of the 537 latest cases.

Among the thousands of medical staff fighting the epidemic are Irish doctors, like Dr Angela McBride who is working at a new Ebola Treatment Centre at Port Loko in Sierra Leone.

Dr McBride is part of a UK National Health Service team who volunteered for secondment to GOAL.

The Irish relief agency has a staff of 200 in Sierre Leone where it is collaborating with the UK Government on a €15 million, 100-bed Ebola treatment centre in Port Loko.

Writing in the Irish Independent she said that she and her colleagues have “a deep-seated desire to show human compassion to a nation that has been blighted by poverty and is now subject to the deadly Ebola virus.”

Many of us have struggled to negotiate time off from work, she writes, and to find cover for our clinical duties, since we deployed at very short notice. But the compelling desire to be a little piece in the jigsaw of international assistance has seen us to this point.

They have left families, and will not see them until after Christmas. “Some of us have made a will for the first time. But we wouldn’t choose to be anywhere else,” she says.

Two things strike her “as particularly cruel in this viciously cruel disease”. The first is that those most vulnerable to the virus are pregnant women and children aged under five, who have “exceptionally poor prognosis when infected by Ebola”.

Secondly “this virus infects by exploiting the caring and kindness that humans show each other. Ebola is passed from loved one or patient to those who care for them. It is that which is best and most admirable in a society that exposes the next in the chain of infection to risk.”

Dr Kilbride, who worked as a registrar in medicine in Dublin and then as a GP in London and Dublin before applying to MSF, describes the centre as a “hive of activity”.

On Tuesday this week, all those admitted tested positive, but there was one piece of good news – “A lady, Bintu has been found to be negative after coming through the worst of the illness. This is call for celebration and the Ebola survivors are discharged with singing and clapping and hugs from the staff.”

Bintu caught the virus from her husband who she cared for when he got ill, their two children, who were 6 years old and 4 years old both died quickly and Bintu was so ill when she arrived at the treatment centre, the nurses were worried that she would not survive.

At the centre that Bintu met Samuel, a three year old boy whose family have all died of Ebola. The nurses doing their rounds in full protective suits looked after him and tried to connect with him but he defiantly refused to eat, drink, or talk.

“Then something remarkable happened,” writes Dr Kilbride, “Bintu and Samuel found each other in the midst of grief and trauma. Bintu started trying to feed Samuel when the nurses would leave the ward.” She was weak but realised she herself had to eat and get strong so she could look after Samuel. Gradually the boy emerged from his shell and four days later he too tested negative to the virus.

“Now comes the long process of looking for his relatives,”writes Dr Kibride, expressing the hope that if no relative can be found to look after Samuel, “somehow he might find Bintu again”.