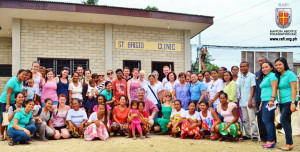 The proud owners of the community health centre with SERVE volunteers, Nano Nagle School teachers, and representatives of other partners.

A new health centre called after an Irish saint has been opened for the Badjao community in Cebu City in the Philippines thanks to Irish donors.

St Brigid’s Clinic was made possible by the Presentation Sisters of the Blessed Virgin Mary (PBVM) and Misean Cara.

At the centre, medical staff and health service workers will provide medical services to improve health of the Badjao people.

“We are glad that we have a health centre where we can hold medical check-ups and training on health and wellness,” Rosalita Jamare Badjao said in her native tongue at the official opening of the centre.

As the health centre was named after St Brigid, construction started on 1st February her feast day.

The ceremony was also attended by representatives from the Committee of German Doctors for Developing Countries, the City Health Office, the National Commission on Indigenous People, and SERVE volunteers representing Misean Cara.

The health centre project was completed in partnership with the University of San Carlos’ College of Architecture and Fine Arts, and the Cebu City government. 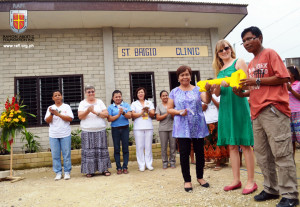 (Foreground, right to left) Cebu City Health Officer Dr Stella Ygonia and Dianne Duggan of SERVE gives to Tribal Chieftain Felecito Asamsa the key to the St. Brigid’s Clinic, symbol of the Badjao community’s ownership of and responsibility to the new health centre.

Also present at the celebrations were many members of the Badjao community, both young and old. They are a unique indigenous people in the Philippines and traditionally have been sea nomads, skilled fishermen, and pearl vendors.

More than five decades ago they left their coastal home areas to move to the cities, but they remain apart with their own dialect and customs. Most of the older generation cannot read or write.

The Presentation Sisters got involved and have been teaching the Badjao children since 1996.

The congregation built the two-story Nano Nagle Child Care and Learning Centre in 2008 which prepares 90 young Badjaos for grade school, and teaches their parents how to read and write.

Sr Evelyn Flanagan, who is involved in this work, told the Filipino paper, ‘The Freeman’ that the parents want their children to go to school so they can have greater choices and get away from discrimination.

A young teacher at the centre, Venerva Amil, who is a Badjao, believes that people ridicule them because they are different. She believes education is key to earning public respect and getting better opportunities.

It is not plain sailing, however, and pupils sometimes leave school to go with their families on their next fishing expedition. This is changing gradually and literacy is improving.

The project also involved building brick houses for more than 140 families in the community. Each homeowner had to put in 480 hours of work and this work was priced so they knew the actual value of what they had contributed.

A perimeter fence and the health centre completed the project. The overriding aim is that the community becomes self reliant.