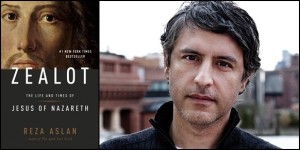 Harry Potter producer David Heyman has signed on to produce the film adaptation of Reza Aslan’s book ‘Zealot’, which examines the life of Jesus through known historical fact.

The book has been controversial among Christians for removing Jesus from a religious context and calling many aspects of the Bible into question.

Lionsgate acquired the rights to the film adaptation in December.

Heyman previously produced all eight instalments in the Harry Potter series, and is also set to produce wizarding spin-off ‘Fantastic Beasts’ and ‘Where to Find Them’ from a screenplay by JK Rowling, due in 2016.

Aslan was famously featured in a car-crash promotional interview for ‘Zealot’ on Fox News in July 2013, where he was repeatedly asked why he had written a book about Christianity when he is himself a Muslim.

Aslan stated his academic credentials as a scholar of religion many times, but found his motives continuously questioned by the Fox anchor.

The interview went viral, receiving significant media attention and causing sales of the book to surge.

Speaking in December, Lionsgate co-president Erik Feig said, “Reza Aslan has written a remarkable book that manages to bring the ancient world into contemporary relief and to make a timeless story very timely.”

“We are excited to create this uniquely cinematic and immersive world for moviegoers to experience.”

According to Deadline, James Schamus (The Ice Storm, Crouching Tiger, Hidden Dragon) is writing the script.