Tributes for book on Korean years of IMU chief 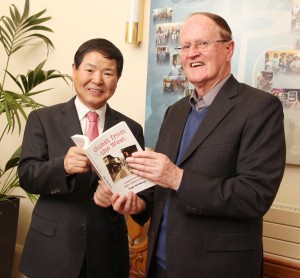 A very elegant and timely reminder of the valuable contribution of the Columban Fathers to Korea was Ambassador Mae-Yun Park’s assessment of a new book by IMU chief Fr Hugh MacMahon.

Launching ‘Guest from the West – Lessons for the West from a Lifetime in the East’, which recounts a life spent in Korea and China, exploring both the cultural and religious aspects of the East, the Ambassador noted that the Columban priest first went to Korea in 1964.

He served in Kangjin, Jeju Island, Kwangju and Seoul until 1995. He also served as attaché at the papal nunciature.

In addition to his time spent in Korea, Fr MacMahon also lived in China, undertook Asian Studies in Ottawa, worked within grassroots communities, and wrote ‘The Scrutable Oriental’ and managed volunteer teachers in China, all the time learning from the people he set out to teach.

The missionary priest now acts as Executive Secretary of the Irish Missionary Union.

“During Hugh’s stay in Korea, the country underwent a sea change and had turbulent times. He has seen poverty after the Korean War, hard living and working conditions and rapid industrialisation and massive urbanisation in the 60s and 70s,” the Ambassador said in his address on Tuesday at the Mercy International Centre on Dublin’s Baggot Street. 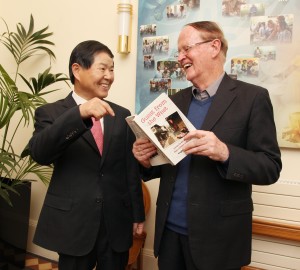 “All through these years he volunteered to go into the most impoverished communities and lived with the needy people there. I am grateful that Fr MacMahon has never lost his love for the Korean people and continued to always come back and visit,” Ambassador Mae-Yun Park said.

Last year marked the 80th anniversary of the arrival of the first Columban Fathers in Korea.

“Their contributions to Korea, in its most difficult times cannot be underestimated, we cannot thank them enough,” the Ambassador said.

‘Guest from the West’ recounts a life spent exploring both the cultural and religious aspects of the East. What emerges is a fascinating insight into a different world, one in which religion and life are intertwined.

The book shows how engagement with the local culture led Fr Hugh to “look deeply and uncommonly into Confucianism, Buddhism, Shamanism and other traditional belief systems held by the Korean people. Consequently his understanding of Korea was profound, writing frequent articles for the Korea Times on many aspects of Korean society”, Ambassador Mae-Yun Park recalled.

The Columban missionary believes that long-term guests in Asia, such as missionaries, are presented with the best opportunity for deeper exchange, and suggests that with the challenge comes a great reward. 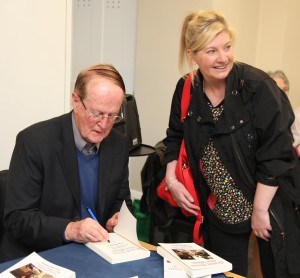 Underlining that Korea is now a democratic and prosperous country with high standards of human rights, and now itself offering development aid to other countries, the Ambassador said that ‘Guest from the West’ is a very eloquent and timely read to once again remind us of the valuable contributions of missionaries over the years.

Dr Lorna Carson of the Asian Studies Department of Trinity College Dublin described the book as a “wonderful publication” saying Fr Hugh was “ahead of the curve in expressing something of the holistic nature of language, identity and culture”.

The first most prominent feature of the book is its value as “a chronological account of the speed and nature of the astonishing economic development in Korea, Hong Kong and China that has led to what we now describe as the ‘Asian Century’: growth of industry, entrepreneurship, huge infrastructure projects. Yet there were also incredibly turbulent times, of student uprisings, of martial law, of sacrifice and deep hurt that scarred more than two generations,” she said.

Dr Carson added that Fr Hugh provided “a remarkably sensitive account of the impact of these social changes on his parishioners.”

She paid tribute to the “beautifully” writing in the book describing it as a “captivating account of a long-term guest in the East” which she suggested has much to teach us.