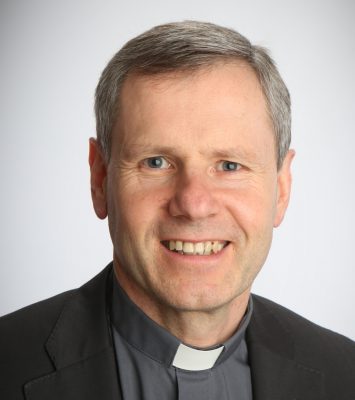 The bishop elect of Cork and Ross said he hopes to engage more with young people.

And judging by the number of people who have been introduced to him via a Twitter video, where he is doing a rap dance with a group of teenagers, he is on the road to succeeding in that desire.

The tweet was posted by Eoin English on 26th June. It shows Bishop Elect Fintan Gavin happily doing a rap dance with around 20 young people. The caption read: “Met the Catholic Bishop Elect of Cork Fr Fintan Gavin today ahead of his ordination Sunday. He hopes to engage more with young people. He met this crew who are attending rap and dance classes.” The video can be viewed on Twitter.

Bishop Elect Gavin will be ordained today at the Cathedral of Saint Mary and Saint Anne in Cork City. This will be the first ordination of a Catholic Bishop for Cork & Ross since 1984.

The outgoing bishop, Bishop John Buckley will be the principal consecrator and Archbishop Diarmuid Martin and Archbishop Kieran O’Reilly will be co-consecrators. Archbishop Eamon Martin of Armagh and other bishops will also be present for the Mass, which will be concelebrated by a further 150 priests.

After Holy Communion, His Excellency Archbishop Jude Thaddeus Okolo, apostolic nuncio to Ireland, together with Archbishop Kieran O’Reilly, will lead the newly ordained Bishop Gavin through his Cathedral to bless the assembled congregation which will include representatives from the diocese’s 68 parishes.

Bishop Elect Fintan Gavin is 53 years old and has served as a priest since 1991. He is the second eldest of seven brothers and sisters and was born on the north side of Dublin. Before this appointment he served as the Chancellor of the Archdiocese of Dublin and ministering at Our Lady of Victories Parish, Dublin.

“The challenge is just starting again, to a new family, a new home, a new faith community,” Bishop Elect Gavin said in an interview on Icatholic. “I’ve thought about it, I’ve prayed about it and I’m really looking forward to that new beginning, that new challenge.

The ordination ceremony will be livestreamed at the Diocese of Cork and Ross website.