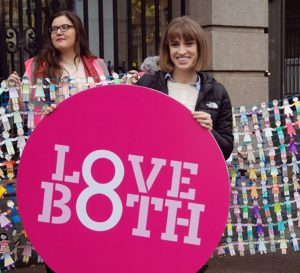 The Catholic Grandparents Association has added its voice to those calling for the retention of the Eighth Amendment and a No vote in May’s referendum.

The grandmother of ten, who is the Association’s spokeswoman said, “We believe that it is only fair that they, like us, should be given their chance at life, however short or fragile it may be.”

The CGA was established in Ireland in 2009 and represents thousands of grandparents here as well as in Britain, the US, Australia and elsewhere.

Mrs Wiley said grandparents understand the challenges that face their daughters and sons as parents, “because we have lived similar challenges in our own lives”. She explained that the “lasting happiness of our own daughters and sons is of the utmost importance to us and we will do all we can to support them in their own role as parents”.

The Co Mayo-native said grandparents “appreciate that abortion may sometimes seem to offer an immediate solution to a difficult situation” but she added, “Quite apart from what it would do to our grandchildren, however, we cannot see how it could ever serve the lasting happiness of our children.” She urged all grandparents, when the time comes, to vote to keep the pro-life Eighth Amendment in the Constitution.

Meanwhile, the Pro Life Campaign has described as “arrogant and deeply undemocratic”, remarks made by Social Protection Minister Regina Doherty. Speaking to the media in Paris on St Patrick’s Day, Minister Doherty said that the repeal side won’t accept a ‘No’ vote in the upcoming referendum on the Eighth Amendment.

She also said her previously held pro-life views were due to “ignorance”.

Ms Sherlock said they “let slip a mindset where the democratic vote of the people is simply a formality which can be ignored if the repeal side loses. Her comments show contempt towards voters and are extraordinary from a member of Government.”

“The Minister’s assertion that her previous support for the pro-life position was due to ‘ignorance’ is an insult to the many families all over Ireland who say their children are alive thanks to the Eighth Amendment. The job of the Government is to ensure the public is informed on all aspects of the debate. This simply has not happened,” Cora Sherlock criticised.

She added that the Government-led Oireachtas committee that proposed the referendum for repeal never explored both sides of the issue fairly or showed the slightest interest or curiosity in hearing the case for keeping the Eighth Amendment. Ms Sherlock noted that Minister Doherty gave her enthusiastic backing to “this flawed process”.

“She and others are all the time talking about ‘trusting women’ but if they were serious about that, they’d be encouraging real debate and not trying to reduce it to slogans that don’t give voters the full picture.”

“If people end up voting No, they’ll do so for all the reasons Regina Doherty wants to pretend don’t exist, like the fact that repeal is about opening the door to abortion on demand, no matter how it is parcelled and packaged as something other than that.”