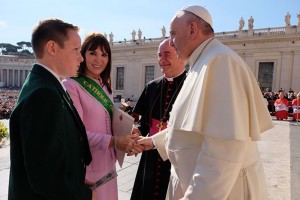 Pope Francis greets Catherine Wiley and her grandson Tom at ‘Blessing of a Long Life’ gathering in St Peter’s Square.

The founder of a worldwide organisation promoting the role of grandparents has expressed her strong wish that the Synod on the Family will keep grandparents in mind.

“I pray, pray, pray that grandparents will be high on the agenda [in Rome] as a solution towards helping families find their way in many different areas – that of faith, morals, values and traditions,” Catherine Wiley told CatholicIreland.net

Ms Wiley, who comes from County Mayo, gave one of the testimonials before Pope Francis at a recent meeting in St Peter’s Square to honour ‘The Blessing of a Long Life’.

“For us the family is the first place in which we pass on faith,” she told Pope Francis and Pope Benedict XVI and 40,000 men and women ‘seniors’ in St Peter’s Square on 28 September 2014.

Although their children were grown and they had grandchildren, their “parental vocation” was not over, she said, but “has grown by embracing the wonderful call to be grandparents”.

“Like Jesus’ grandparents, Joachim and Anne, we too want to be examples of faith for our families, teaching them to put God in the first place, to love our neighbour, to forgive and not to be ashamed to ask for forgiveness. We have realised that to transmit faith we need courage and determination.”

Ms Wiley’s grandson Tom, also spoke at the meeting, telling Pope Francis of how he had been inspired by his grandparents example of prayer to God when they were travelling on a plane and he was frightened.

“Today you are for us, children, like a granddad and we love you very much. Help us to make people understand how important the grandparents are in the family,” he concluded. 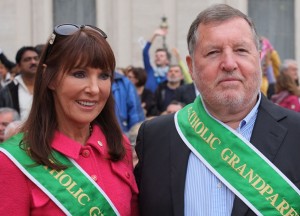 Ms Wiley said that addressing the huge crowd in St Peter’s square before Pope Francis was a “life changing event not just for me, but for the Catholic Grandparents Association.”

“We’ve been working for years to promote the vocation of grandparents. You will never get a greater opportunity than that,” she told CatholicIreland.net

Currently Ms Wiley is in Palm Beach in Florida preparing for the 6th Grandparents Pilgrimage  there which takes place on 18 October.

The sixty-seven year old, who has ten grandchildren, says the Association aims to help grandparents to pass on faith to their grandchildren, and to tell them “how incredibly important they are: what a vital contribution they make at all stages of life, even if they are in a wheelchair or housebound, even if they have nothing to offer but prayer – how needed they are.”

“We have got to do everything to counteract that [‘euthanasia’] mentality,” she said by phone from Florida. “It is not a civilised society if it does not respect the elderly.”

Catherine Wiley and her husband Steward began the Catholic Grandparents Association when she came up with the idea of organising a grandparents pilgrimage to Walsingham (UK) in 2002, and then to Knock in 2007.

Currently there are tens of thousands of grandparents and ‘grandparents at heart’ (including granduncles and aunts and those in religious life) involved in the association in Ireland, the UK, Canada, the US, Australia, the Philippines, Malta, New Zealand, South Africa, Germany, Slovenia, Croatia, Gibraltar, Spain and Dubai.

12,000 people took part in this year’s Grandparents Pilgrimage to Knock which took place on 14 September.