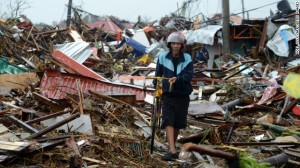 The Government has announced €1million in funding will be made available through trusted Irish NGOs towards the relief effort for the Philippines.

On Sunday, the Tánaiste and Minister for Foreign Affairs, Eamon Gilmore, said the money would go towards providing shelter, food, water and health for the survivors of Typhoon Haiyan.

Tents, blankets and other basic necessities, will be made available by Irish Aid and distributed in the Philippines through NGOs such as Plan Ireland.

Catholic aid agency, Trócaire, said it had committed emergency support to its partners in the Philippines and that 8,000 tarpaulins would be distributed to provide temporary shelter for survivors. The agency said that water and sanitation would be its next focus.

One of Trócaire’s partners, Caritas Philippines, has said the devastation is widespread. Spokesman, Fr Edwin Gariguez said that though emergency planning was underway, “It is a great catastrophe. It’s the strongest and biggest storm that has hit the country. It’s hit an area already devastated by an earthquake. It’s a really big calamity.”

Speaking on Sunday, the Tánaiste said Ireland had “strong bonds with the Filipino people through our missionaries and through the many Filipinos working in our hospitals and elsewhere in Ireland.”

“My thoughts are with the families of those who have perished, and indeed with those waiting to hear news from their loved ones. This funding and the emergency supplies will go towards those most at risk, as the crisis moves to the recovery stage.”

Meanwhile, Minister for Trade and Development, Joe Costello, who is in South Africa where he is currently leading an Enterprise Ireland trade mission, gave further detail on how the Irish Aid efforts will be channelled.

“In addition to those killed from the initial onslaught of the typhoon, millions of people have lost their homes since Thursday and without urgent assistance, their lives are at great risk. This emergency funding will go towards those areas most affected and will save lives by providing essential food and shelter,” Minister Costello said.

He said his officials had been in contact since Thursday with NGO and UN partners operating on the ground in teh Philippines, to see how Ireland could best assist.

“While there are difficulties with access and the scale of the disaster is not yet clear, it’s important that we respond quickly.”

He added, “In addition to the funding, stocks of temporary shelters and blankets will be flown in from our base in Dubai tomorrow. Experts from our Rapid Response Corps are also on standby and ready to assist our UN partners on the ground if required.”

The Irish Aid funding will be provided to NGOs and will be distributed on the basis of needs assessments currently being carried out by UN, Red Cross and NGOs in the affected areas.

Two hundred tarpaulins, 85 family tents, 10,000 blankets and other basic food and hygiene necessities are being made available from Irish Aid stocks, pre-positioned in Dubai and are due to reach the Philippines today.