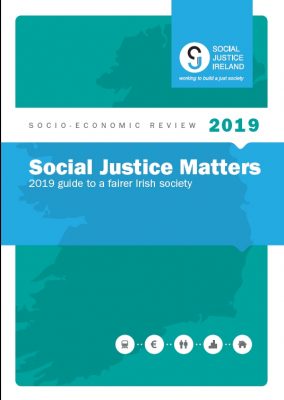 Dr Seán Healy SMA, chief executive of Social Justice Ireland (SJI), has written in the Irish Independent that neither rebranding nor changing official data recording methods have worked; nor has the government policy Rebuilding Ireland.

“The government’s housing policy is not working. The scale of its overall strategy is not sufficient to meet the challenge it addresses,” Dr Seán Healy stated.

SJI’s book aims to chart a course to a fairer Ireland. It states that Irish society has been making a major mistake in believing that economic growth would lead to all problems being resolved. While economic growth has helped to improve living standards, infrastructure and public services, the benefits of these improvements have been distributed in a “grossly unequal fashion”. The book addresses how Ireland needs a more appropriate model of development.

Housing, or lack of it, looms large in the book. Dr Seán Healy stated in his article: “For those in the midst of a housing crisis that has been dragging on for more than a decade, talk of recovery is cheap.”

In contrast, subsidies to private landlords in the form of the Housing Assistance Payment (HAP) rose from 11 per cent of social housing output in 2014 when it was introduced in the Autumn to 73 per cent in the first three-quarters of 2018.

There is very little long-term security for tenants in rented accommodation on HAP, rent inflation continues in double-digits, and standards are poor in some accommodation. In this climate Dr Seán Healy asserts that homelessness is increasing at “an alarming rate”.

Likewise those who have bought their own family homes are at risk of homelessness if they are in arrears. Dr Healy stated that the latest figures show 64,510 family home mortgages are in arrears and it is not just “non-performing” loans that are being sold to non-Irish banks, all of which leaves families in fear of eviction and homelessness.

The SJI’s 2019 socio-economic review proposes measures to tackle this crisis. They include:
– Build more social housing and allow local authorities and approved housing bodies to pool resources to finance this in a sustainable way.
– Develop a system of affordable rent through the cost rental model, financed “off-balance-sheet” to allow for supply to scale up without adding to the general government debt.
– Increase the provision of Housing First accommodation for families in emergency accommodation and limit the length of time families can spend in family hubs.
– Develop a spectrum of housing supports for people with disabilities.
– Introduce sanctions for local authorities who do not use available funding for Traveller accommodation.
For full report see: https://www.socialjustice.ie/.