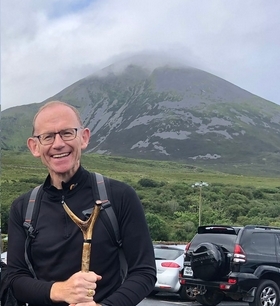 Bishop Fintan Monahan about to ascend the Reek (Photo: ICBC).

Organisers of this year’s Reek Sunday pilgrimage to the top of Croagh Patrick in Co Mayo were delighted with how the day went.

Those who tackled the mountain early had to contend with wet conditions on the summit, while it was covered in cloud. But as the day progressed the clouds dispersed, the sun came out and pilgrims were rewarded with magnificent views of Clew Bay from the 764m-high vantage point.

Bishop Fintan Monahan of Killaloe, who celebrated the midday Mass on top of the Reek, tweeted “A glorious day, thank God!”

Mayo Mountain Rescue (MMR) reported that they had to deal with 15 casualty incidents, none of them serious. In nearly all cases of injury, those hurt or feeling the effects of exhaustion were able to recover and walk off the mountain themselves.

The Order of Malta and members of the Civil Defence were also on hand to provide first aid, but it is reckoned that out of the 5,000 or so who made it to the top, no more than two dozen people suffered any form of injury during their climb or their ascent.

An Air Corps helicopter was involved in evacuating two people off the mountain as a precautionary measure. One of these was a cardiac patient who needed to be transferred to a specialist care unit. 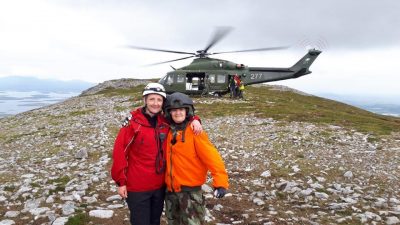 There was a touch of “happy landings” to one of these Air Corps operations, as it led to a reunion between Mayo Mountain Rescue volunteer Odette Duignan and helicopter crew member Tracey Walsh, who hadn’t seen one another since 1994, when they were both in army recruit training together.

Among those who made the pilgrimage was Luc Abel from Flanders, who has spent the last three months walking from his home in Belgium to this holy spot in the west of Ireland.

The Archbishop of Tuam, Michael Neary made it to the summit to celebrate Mass there at 11am. Afterwards he described the pilgrimage as “a parable on life itself”.

“There is a cooperative dimension and a willingness to make way for others who might be finding it more difficult.”