Pope urges Christians: Get involved personally with the poor 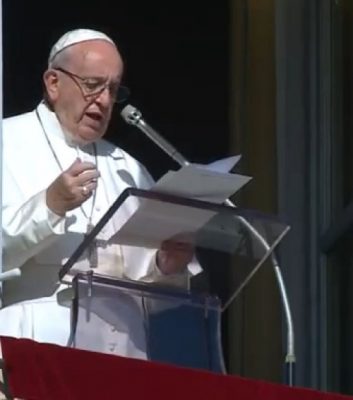 Today is the second World Day of the Poor, with the theme of “This poor man cried, and the Lord heard him”.

In his message for today, Pope Francis highlighted two verbs – cry and hear.

Poverty cannot be summed up in a word; it becomes a cry that rises to heaven and reaches God, he wrote. “We can ask ourselves how their plea can fail to reach our own ears, or leave us cold and indifferent. On this World Day of the Poor, we are called to make a serious examination of conscience, to see if we are truly capable of hearing the cry of the poor.”

To hear their voice, what we need is the silence of people who are prepared to listen, the Pope continued. “At times I fear that many initiatives, meritorious and necessary in themselves, are meant more to satisfy those who undertake them than to respond to the real cry of the poor. We are so trapped in a culture that induces us to look in the mirror and pamper ourselves, that we think that an altruistic gesture is enough, without the need to get directly involved.

“The Psalmist tells us that the Lord does not only listen to the cry of the poor, but responds. The World Day of the Poor wishes to be a small answer that the Church throughout the world gives to the poor of every kind and in every land, lest they think that their cry has gone unheard. It may well be like a drop of water in the desert of poverty, yet it can serve as a sign of sharing with those in need, and enable them to sense the active presence of a brother or a sister. The poor do not need intermediaries, but the personal involvement of all those who hear their cry.”

It cannot be limited to a “kind of social assistance”, as Evangelii Gaudium says concern for them requires a “loving attentiveness” that honours the person as such and seeks out his or her best interests.

From this concrete and tangible proximity, a genuine path of liberation emerges, wrote Pope Francis. “Each individual Christian and every community is called to be an instrument of God for the liberation and promotion of the poor, and for enabling them to be fully a part of society.”

Poor people identify with Bartimaeus in the Gospel, said Pope Francis. “How many people today feel in the same situation! Lack of basic means of subsistence, marginalisation due to a reduced capacity for work, various forms of social enslavement, despite all our human progress.

“They are waiting for someone to come up to them and say, ‘Take heart; rise, he is calling you’, but sadly often experience the exact opposite. We tend to create a distance between them [the poor] and us, without realising that in this way we are distancing ourselves from the Lord Jesus.

“I would like this year’s, and all future World Days, to be celebrated in a spirit of joy at the rediscovery of our capacity for togetherness. Praying together as a community and sharing a meal on Sunday is an experience that brings us back to the earliest Christian community.”

While working with other agencies was to be welcomed, said Pope Francis, Christians should not downplay their specific role – which is to lead everyone to God. He urged all Christians to honour the poor.

“Far be it from Christ’s disciples to nurture feelings of disdain or pity towards the poor. Instead, we are called to honour the poor and to give them precedence, out of the conviction that they are a true presence of Jesus in our midst. ‘As you did it to one of the least of these my brethren, you did it to me’ (Matthew 25:40).

Appealing to Church leaders, religious, ecclesial movements to experience this World Day as a privileged moment of new evangelisation, Pope Francis said, “The poor evangelise us and help us each day to discover the beauty of the Gospel. Let us not squander this grace-filled opportunity.”