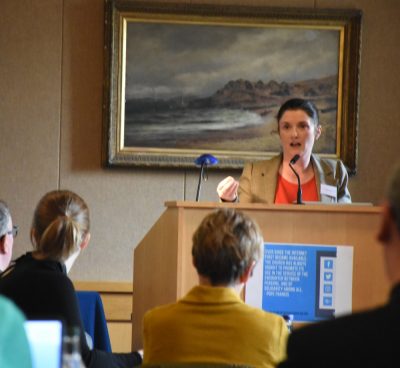 Children on free websites are at increased risk from predators, according to a specialist in online child exploitation.

“Where do the offenders, the predators go to find them? To these free places,” Detective Sergeant Mary McCormack said at the Believers in the Digital World seminar earlier this week.

Ms McCormack told the seminar that instances of online abuse were getting greater every year.

“In my office we receive referrals every single morning – from the tens to maybe 50 to maybe 100 – in relation to children being abused in Ireland.”

There were three problems associated with online technology, she said, echoing what Dr Al Cooper referred to as the “Triple A Engine” to sex on the internet: access, affordability and anonymity.

The internet is accessible everywhere – on buses, trains, in cars. “If you working in groups and allowing free internet, for example in a parish setting, ask yourself ‘Is it distracting?’ Reducing accessibility to the internet might make a better event.”

Ms McCormack said she was working with internet providers to try and help them understand the potential dangers of unlimited internet access for children. “[I’m] trying to get across to them that it is not right for a parent to walk in for their [child’s] communion and buy a kid a phone and hand it over to them with a full data allowance.”

She has worked with Eir, which has created a small document to be handed out with each phone that’s sold for an underage person. “That is progress,” Ms McCormack said.

On the internet, a person can be anonymous – or whoever they want to be – but the detective advises children using social media to “be who you are on internet”, using your real identity

“I think if a child is hiding behind something, they are more likely to offend, to be the cyberbully, to be that person who is not nice on the internet.”

While children learn about the net very quickly, they are also easy targets. “They have fewer inhibitions than adults. They will say anything, put up any kind of picture. At the same time, they are very naïve and trusting and believe what they are told is happening.”

Many children are lonely and vulnerable. “I’ve seen the chats of kids in rooms,” said Ms McCormack. “They are on their own. They don’t know who to talk to. Maybe Mum and Dad are trying their best but they are working two jobs, coming home, trying to get the dinner ready and haven’t time to talk to them, so what do they do? They go online to talk to people. They need that attention, they need that affection.”

She added that the ideal victim for predators were rebellious children. “If something happens on the internet they are less likely to go to their parent. They are reluctant, if they break the rules, to admit ‘I was stupid’.”

She advised parents to educate themselves, and recommended they visit WebWise, a website which addresses internet safety issues.

Ms McCormack established the Victim Identity Unit of the Gardaí two years ago. “I examine images and videos of child abuse and try to locate the victim and the suspects and take them out of those situations,” she said.

Speaking to CatholicIreland.net after her presentation, she recommended that when a parent gives a child a smartphone there are rules right from the start. “There has to be some kind of a policy in place between a parent and a child. Don’t allow them have the internet at night time or Wi-Fi at certain times of the day, and have that rule in place from the start. It’s easier, then, to implement going forward.”