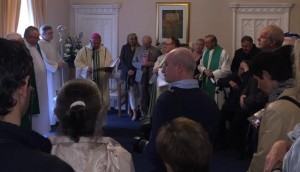 The Archdiocese of Dublin is to devote time in the future to the formation of families and young people Archbishop Diarmuid Martin has signalled.

In his homily for a family Mass at the parish of St Peter’s in Phibsborough, which was followed by the dedication of a room in honour of the Legion of Mary founder, Frank Duff, the Archbishop said the Legion would be in the vanguard of the formation of a new generation of trained, voluntary catechists and pastoral animators.

He said these would place themselves at the service of parishes to make them truly places of faith education.

In a tribute to Frank Duff, the civil servant who was instrumental to the setting up and promotion of the Legion in Ireland and beyond, Archbishop Martin said he was acutely aware decades ago of how the institutional structure of the Catholic Church in Ireland, which outwardly appeared so robust, in fact had within itself an innate debilitating factor – the lack of faith formation for and trust in lay men and women.

Frank Duff, he said, stood as “a model of robust lay leadership in the Church.

“He was a humble man, yet in no way obsequious; he respected authority yet could be a formidable challenger of authority,” the Archbishop commented.

He warned that there was a temptation on the part of many in the Church today to feel that if people have difficulties in believing, then the Church should make belief easier, and try to remove the things which people find hard to accept in order to create a religion to which anyone who wants to be “more or less” a good person, can “more or less” belong to the disciples of Jesus.

The challenge of following Jesus is never about adapting to public opinion surveys, but about real commitment and about conversion., he said and added, “God is never revealed through arrogance.”

Describing Frank Duff as “a man who made an extraordinary contribution to the life of the Church” the Archbishop said his ideas on the role of the laity were “progressive and revolutionary”.

“Frank Duff was a layman and never dreamt of being anything other than being a layman. He was immensely proud to have been invited to an Ecumenical Council as a layman. He understood that being a lay person should in no way mean being a sort of second-class Christian,” he said.

He saw that lay and cleric is called to holiness and that holiness is in no way the privilege of the ordained, or the automatic right of any category within the Church.

The Archbishop acknowledged that Frank Duff’s vision of the role of lay people in the Church was not fully understood by Church authorities in Ireland. “He was a person absolutely loyal to the Church, but in no way a yes man,” he said.

Of the situation of the Irish Church today, the Primate of Ireland said it needs “a new generation of strong and articulate lay men and women. It needs a strong laity which is not inward looking or caught up simply in Church structures and activities or narrow Church politics.”

“We need a new generation of Catholic lay men and women who, like Frank Duff, are articulate in understanding their faith and feel called to bring the unique vision which springs from their faith into dialogue with the realities of the world.”

We need especially strong families where the fundamental essence of our faith is lived and transmitted and prayed, he emphasised.

Describing Frank Duff as a model of robust lay leadership in the Church, Archbishop Martin said he was a humble man, and while he respected authority, he could be a formidable challenger of authority.

“His life was focused in one direction only: he knew, as we heard the true disciples say in today’s Gospel reading, that there was nowhere else to go except to follow Jesus, and day after day he sought to faithfully follow that path.”