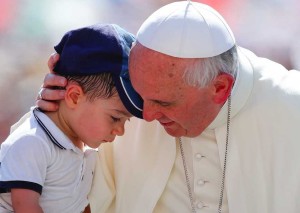 Pope Francis has appealed to Christians in his message for Lent to confront the ‘globalisation of indifference’ which permeates the world.

The Pontiff said it is summed up in the attitude that “As long as I am relatively healthy and comfortable, I don’t think about those less well off”.

Indifference to our neighbour and to God represents a real temptation for Christians, he warned.

“God is not indifferent to our world; he so loves it that he gave his Son for our salvation.”

The Church is like the hand holding open a gate between God and human beings. But the world tends to withdraw into itself and shut that gate, the Pope observed.

The Church, must never be surprised if it is “rejected, crushed and wounded,” he says.

But to stop themselves becoming indifferent, or withdrawing, Christians need an interior renewal. For this Pope Francis suggests three slogans.

For the Church, the motto is “If one suffers, all suffer together.” Members of the Church must allow Christ to serve them so that they become more like him.

“This happens whenever we hear the word of God and receive the sacraments, especially the Eucharist, he says. There we become what we receive. When people are ‘in Christ’ they cannot be indifferent to one another. They share with each other and in the communion of saints, with those in heaven.

“In this communion of saints, in this sharing in holy things, no one possesses anything alone, but shares everything with others.”

For parishes and communities, the Pope suggests the motto: “Where is your brother?” (Genesis). He invites parish communities to press beyond “the boundaries of the visible Church”.

Firstly by being united to the Church in heaven. “Together with the saints who have found their fulfilment in God, we form part of that communion in which indifference is conquered by love.”

Secondly to go out and be engaged in the life of the greater society especially with “the poor and those who are far away”.

“In each of our neighbours we must see a brother or sister for whom Christ died and rose again. What we ourselves have received, we have received for them as well. Similarly, all that our brothers and sisters possess is a gift for the Church and for humanity,” says Pope Francis who prays that parishes become “islands of mercy in the midst of the sea of indifference!”

Finally, to individuals, Pope Francis says: “Make your hearts firm!” (James 5:8), calling on Christians to pray, and do “acts of charity” showing we belong to one human family.

The suffering of others is a call to conversion, he says, since “their need reminds me of the uncertainty of my own life and my dependence on God and my brothers and sisters.”

As a way of “overcoming indifference and our pretensions to self-sufficiency” the Pope asks for a ‘formation of the heart’.

“Anyone who wishes to be merciful must have a “strong and steadfast heart” a heart which lets itself be “pierced by the Spirit so as to bring love along the roads that lead to our brothers and sisters”.

He reminds Christians to unite in prayer during the ’24 Hours for the Lord’ on 13-14 March.