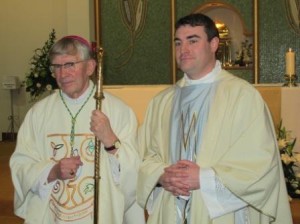 In his homily for the ordination ceremony on Sunday at the Church of the Real Presence, Fr Tom Deenihan, diocesan secretary, described ordination as a sign of hope.

“It means that Christ is still calling men to the ministerial priesthood, it means that some of those who hear that call have the faith to respond to it and, for us priests, it means fellow workers, younger colleagues and, to some extent, a validation of our work and proof, despite all the prophets of doom and our own efforts at times, that priesthood is still a valid and valued calling.”

Fr Deenihan added that for the faithful in the parishes of the diocese, it means another priest who will work with them, who will celebrate the Sacraments for them and who will become a member of their faith community.

“We have parishes in this diocese where people fear the loss of their resident priest. Marius’ ordination is welcome and good news for them in particular,” the Cork & Ross priest said.

Elsewhere in his homily, the diocesan secretary said an ordination today in Ireland is “more counter cultural than the hippies of the sixties, the punks of the seventies and anything that we have witnessed either since or in between!”

He said a young man, with qualifications and experience in the world of business, taking promises of obedience and celibacy and dedicating his life to working as a priest must point towards other realities.

He added that it proved, once again, that what St Augustine said centuries ago still holds, ‘Our hearts are restless and they shall not rest until they rest in you.’

Recalling Pope Francis’ publication of Evangelii Gaudium on the Feast of Christ the King last year, Fr Deenihan said in it the Pope said that the great danger in today’s world, pervaded as it is by consumerism, “is the desolation and anguish born of a complacent yet covetous heart, the feverish pursuit of frivolous pleasures and a blunted conscience”.

He warned that “Whenever our interior life becomes caught up in its own interests and concerns, there is no longer room for others, no place for the poor.”

“God’s voice is not heard, the quiet joy of his love is no longer felt, and the desire to do good fades.”

Fr Deenihan explained that “The point of all this is that there is a contradiction between the Gospel and contemporary culture, between the Kingdom of God and the modern city, between the Christian and the twenty-first century citizen.”

However, he underlined that an outright condemnation of culture is not the way of the Gospel.

“We are called to engage with contemporary culture and to cherish what is of the Gospel in our culture, not to condemn our culture or to fight against it. Culture is, after all, the context in which the Gospel is preached!”

In the rite of ordination Fr Marius promised obedience to Bishop Buckley and his successors.

Bishop Buckley paid tribute to Fr Marius and his family at the end of the ceremony, saying that how a family responds and supports a vocation is a sign of a family’s faith.

Bishop Buckley was joined by Bishop Christy Jones, the retired bishop of Elphin and a friend of the O’Reilly family and Archbishop Patrick Coveney, a retired papal nuncio who is from the Diocese.

Over fifty priests concelebrated the Mass.

Fr Marius is a native of Bishopstown and attended both Scoil and Colaiste An Spioraid Naoimh there.

After school he studied for a BComm in UCC, and then completed a MSc in Marketing in the Smurfit Business School (UCD).

Later the future priest worked in London as a business consultant, in the IT and mobile arena, for a number of years, before discerning his call to the priesthood.

When asked about his ordination on Sunday, Fr Marius said “The sense of peace, joy and fulfilment I feel is only understood by the Lord’s own words ‘the peace I give is a gift the world cannot give’.”