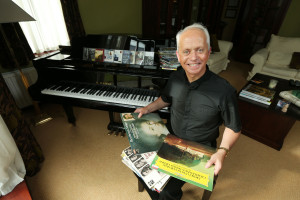 One of the well known trio of singers The Priests is making his radio debut this month.

“I’ve never done anything like this before but I’m eager to give it a try and learn how it’s done and at the same time get to play some of my favourite pieces of music which I hope BBC Radio Ulster and BBC Radio Foyle listeners will like, recognise and have in their list of favourites too.”

As well as playing well known and loved hymns, as well as some classical and his own personal favourites, Fr O’Hagan will also play a wildcard track such as Eleanor Rigby by The Beatles or You Raise Me Up by Josh Groban.

As well as being one third of the famed music group The Priests, Fr O’Hagan is also a canon lawyer, judicial vicar, and Chancellor ad interim of the Diocese of Down and Connor and Administrator of the Parish of Ballyclare and Ballygowan.

Now living in Ballyclare, Fr O’Hagan has been singing with his younger brother, Fr Martin O’Hagan and friend Fr David Delargy since they met in the 1970s at St MacNissi’s College in Co Antrim.

After college and seminary they spent some time in the Irish College in Rome. There, Fr Eugene O’Hagan took singing lessons from Maestro Sergio Ballani and it wasn’t long before their talents were noticed and they performed for Pope John Paul II.

After returning to Northern Ireland, the three priests became founder members of the Belfast-based choir Cappella Caeciliana, with whom they recorded three albums between 2001 and 2008.

They then became known as The Priests and soon reached worldwide fame. They have performed for the Royal Family, Pope Benedict XVI and Pope Francis.

In the coming months they will perform in Rome on 10 October at the Church of Santa Marie Sopra Minerva. On 14 October they will be in the Royal Albert Hall, London.

On 27 November they are back in Ireland at the National Concert Hall Dublin. The Haiti Concert, as the event is called, includes The Priests, Cara O’Sullivan with the RTÉ National Symphony Orchestra conducted by Christopher Bell.

This is another debut, this time for The Priests who perform for the first time with the RTÉ National Symphony Orchestra. The concert will include classical favourites and tracks from their albums.

The concert will raise vital funds for Haven, an Irish charity that work solely in Haiti. The special guest for the night and one of Ireland’s favourite sopranos, Cara O’Sullivan and she will sing popular arias from the world of opera and operetta.