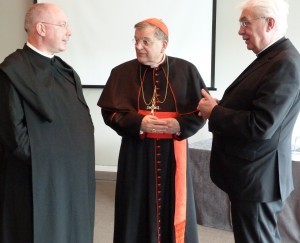 Catholic theologian Fr Vincent Twomey has said the Church must look critically at both the novus ordo form of the Mass and the extraordinary form or the Latin Mass to establish whether they are in accordance with the four criteria set out by Sacrosanctum Concilium.

Speaking after the Sixth Fota International Conference which marked the 50th anniversary of the Second Vatican Council’s constitution on the liturgy, the Divine Word Missionary said it outlined the Council Fathers’ own understanding of the Council and the place of liturgy within it.

In his opening address to the three-day conference in Cork, the retired professor of moral theology at Maynooth referred to a book of translations of Council documents by Fr Austin Flannery OP.

The title of Chapter One in this publication is ‘General Principle for the Restoration and Promotion of the Sacred Liturgy.’

According to Fr Twomey, the use of the term “restoration” should be noted as it indicates that “Up to at least 1975, the Latin instaurandam, literally renewal, could be translated as a synonym for “reform”, as Flannery does – and no one took offence.”

However, he said the term has now become a term of abuse and he suggested that this development in the term’s usage and meaning within theology, is not unrelated to the use of the term by the then-Cardinal Ratzinger in Messori’s ‘Ratzinger Report’.

“When Ratzinger used the term, it set off a howl of rage among the so-called theological liberals,” he claimed and added, “His use of the term was seen as proof that Ratzinger was trying to undo the work of the Council.”

Speaking to CatholicIreland.net, Fr Twomey said the “notion of restoration was not seen to be in any way questionable” in 1975. “The Council saw itself as restoring to the Church much of the richness of the early Church that had been lost after the Council of Trent.”

He recalled an episode to underline the “totally incorrect picture of Ratzinger” as portrayed by liberals in the Church and media and which Pope Emeritus Benedict XVI spoke about in an extempore talk to the clergy of Rome two weeks before his resignation where he outlined his own involvement in the Second Vatican Council.

According to Fr Twomey, when the then 33-year-old theologian, Fr Ratzinger, was appointed Professor of fundamental and dogmatic theology in Bonn in the Diocese of Cologne, the cardinal archbishop at the time was Cardinal Frings.

“The Cardinal heard Ratzinger speak and asked him to prepare a paper for him [Frings] which he was to give in Genoa at a meeting in 1961 organised by Cardinal Siri of Genoa, where the leading hierarchs of Europe were meeting to discuss what they wanted out of the Council.”

“Cardinal Frings asked Ratzinger to give him a vision of what the Council might attempt.”

When he spoke to the clergy in Rome in ahead of his resignation, he [Benedict XVI] said that Frings read his paper, made a few minor adjustments, and went to the meeting in Genoa and read the paper. “It had quite an echo as it was quite revolutionary at the time,” according to Fr Twomey.

Frings was summonsed to Rome to see the Pope. “He went in trembling, fearing he might lose his hat but John XXIII embraced him and said ‘what you said [in the paper] is what I would have liked to have said about what I want for the Council but couldn’t articulate it.’”

“Ratzinger is one of those extraordinary people – he is so deep and so profound, you can’t put him into any camp. Each camp has tried to keep him for themselves but he is neither – he is always trying to find the balance,” Fr Twomey commented.

Fr Twomey told CatholicIreland.net that the Church now needs to look at what happened after the Council and examine what has happened critically in the light of the actual conciliar document Sacrosanctum Concilium.

Referring to the four criteria which the Council Fathers outlined in the very first chapter of Sacrosanctum Concilium, he suggested that these should be the benchmark against which any critical evaluation is undertaken.

The four principles are: to reinvigorate the faith of the Church; to adapt more closely to the needs of our age those institutions or structures which are subject to change; to foster whatever can promote union among all who believe in Christ – ecumenism; and to strengthen whatever can help to call all mankind into the Church’s fold which relates to the missionary dimension.

Referring to the first principle concerning reinvigorating the Christian life of the faithful, Fr Twomey said everyone in the Church must address the question, notably those who criticise Ratzinger – where is the vigour in the Church today?”

“I entered the SVDs in 1963 – a few months before Sacrosanctum Concilium was actually passed. There were 35 novices at the time and in the last 15 years we have had one. What happened? Maynooth had over 500 students in my time and now it has 61.”

He added “We are moving on. The reform has worked. It is not perfect. There is a lot to be done but basically – thank God for the Second Vatican Council and renewal of the liturgy – the ‘restoration’ of the liturgy!”

This year’s speakers included Cardinal Raymond Leo Burke, Prefect of the Supreme Tribunal of the Apostolic Signatura in the Vatican who gave his address on ‘Liturgical Law in Sacrosanctum Concilium and its Implementation.