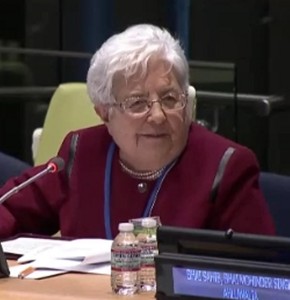 On Wednesday last (22 April 2015), the President of the Christian movement Focolare took part in a high level debate on Promoting Tolerance and Reconciliation: Fostering Peaceful, Inclusive Societies and Countering Violent Extremism at the United Nations.

Maria Voce, known in the Focolare as Emmaus, was one of a number of speakers representing the great religions of the world.

Others included Abdallah bin Bayyah, president of the Forum for Peace in Muslim Societies and David Rosen, international director for interreligious affairs of the American Jewish Committee.

Representatives of 195 countries participated at the event.

Tracing the origins of Focolare, a movement born in Northern Italy during World War II, Ms Voce said it began when a group of girls, lead by Chiara Lubich, decided to “risk their lives to relieve the suffering of the poor.”

This choice continues to be made today in refugee camps in Lebanon, Syria, Jordan and Iraq by people who “introduce into the destructive cycle of conflict a commitment to regenerate the fabric of society, by doing – according to the vocabulary of this organization would say – peace-building action”.

Pointing to the strong inter-religious dialogue in Focolare involving Christians, Muslims, Jews, Buddhists, Hindus and members of Traditional Religions, Ms Voce said that for Focolare the “encounter between cultures and religions” was a fruitful experience not “confined to tolerance or the mere recognition of diversity.”

In fact, going beyond reconciliation, it created “a new identity, one that is broader, more general and shared”. 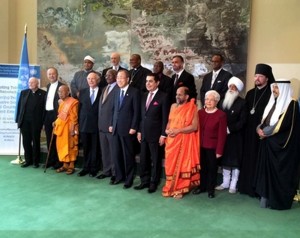 “It is an effective dialogue which brings together people of very different beliefs, including non-religious beliefs. It spurs us to see what the real needs are and to respond together to the most difficult challenges in society, (…) as our commitment to a more united and socially inclusive world.”

“This is happening in places which have been or are at present characterized by very serious crises, such as Algeria, Syria, Iraq, Lebanon, the Democratic Republic of Congo, Nigeria and the Philippines.”

Based on the movement’s experience, she said the response to violent extremism had to be “extremism in dialogue”.

“A dialogue which requires the highest level of engagement, which is risky, demanding, challenging and which aims to sever the roots of incomprehension, fear and bitterness.”

She asked the United Nations to reconsider its own vocation.

What does being a ‘United Nations’ organisation mean today, if not an institution which truly works towards unity among nations, while respecting their strong identities? she asked. While maintaining international security was essential, it was not the same as peace she added.

Ms Voce recalled the motto formulated by the founder of Focolare, Chiara Lubich at the UN in 1997: “Love your neighbour’s country as your own” so as to build up universal fraternity.

She concluded: “Lastly, we cannot give ground to those who attempt to describe current conflicts as ‘wars of religion’. War is by definition irreligion. Militarism, economic dominance and intolerance at all levels are causes of conflict, together with many other social and cultural factors among which religion is often only an unfortunate pretext.”

What the world was witnessing were not wars of religion, but “the religion of war”.

To counter this, Ms Voce invited people to have the courage to “invent peace”.

“The time for ‘holy wars’ is over. War is never holy, it never has been. God does not want it. Only peace is truly holy because God himself is peace.”

Focolare has been present in Ireland since the early 1970s and involves around 1,000 people. It has centres in Dublin, Belfast and Kildare.