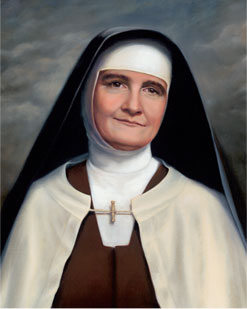 A parish in Scotland and a parish in Ireland are forging new links with one another as a result of a joint devotion to Venerable Mother Mary Angeline, founder of the first American religious order dedicated to the care of the elderly.

The Irish tricolour, the Vatican flag and the Scottish Saltire were flying high outside the Holy Family Church in Mossend, North Lanarkshire, this weekend. Parishioners there were joined by a group of 30 pilgrims from St Brigid’s Parish, Brockagh, Co Tyrone in the celebration of a votive Mass dedicated to the founder of the Carmelite Sisters for the Aged and Infirm.

“It was a great occasion and we were delighted to play host to the Irish who travelled over from Co Tyrone,” said Mossend parishioner John Mallon. “We’re hoping to make a return trip to Brockagh next, and there is even talk of setting up some kind of parish twinning arrangement.

“Mother Mary Angeline would make a very good official saint of the church for the times we are living in. Increasingly, there is talk of euthanasia and the deliberate killing of the terminally ill.

“She showed in her life that there is another way, where you treat the elderly and the sick with kindness, dignity and compassion.”

Born Brigid Teresa McCrory in the parish of Brockagh in 1893, the would-be Carmelite and her family moved to Mossend in North Lanarkshire when she was seven. She spent the next 12 years of her life here and through her schooling she developed a love of the French language, which led to her changing the spelling of her Christian name to Bridget.

Her Francophilia may also have partly informed her decision to join the Congregation of the Little Sisters of the Poor, a French order engaged in the care of the destitute.

Before she left, she visited the then-parish priest of Mossend, who gave her his blessing and told her to pick any book from his collection. Closing her eyes, she picked The Life of St Teresa of Ávila, a saint whom she would emulate by becoming a Carmelite founder.

Bridget entered the novitiate in La Tour in France and took the religious name Sr Angeline de St Agatha. After her profession, she was sent to serve in New York in 1915, where she was appointed superior of a Home of the Little Sisters of the Poor in the Bronx.

During her annual retreat in 1927, a feeling grew in her that more needed to be done for the elderly for whom she was caring and that the ways of France did not suit the ways of the New World in America. She sought advice from the Irish-American Cardinal Patrick Hayes and he gave her, and six other sisters, his blessing to withdraw from her congregation and form a new order.

This group’s work was of interest to New York’s Carmelite Friars, with the result that they became affiliated with the Carmelite Order. In 1931 they became known as the Carmelite Sisters of the Aged and Infirm, the first order founded in America to be solely dedicated to care of the elderly.

Mother Mary Angeline died in 1984, aged 91. Today, the order runs 18 elder-care facilities in the United States and one in Dalkey, Co Dublin.

In 1989, her Cause for Beatification and Canonisation was initiated by the Diocese of Albany and in 2012 Pope Benedict XVI declared she had led a life of heroic virtue and gave her the title Venerable Mother Mary Angeline Teresa McCrory.