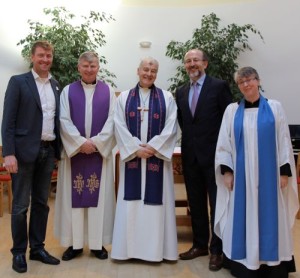 The service, which was attended by DCU President, Professor Brian MacCraith, along with university staff and students, included the imposition of ashes.

In his sermon, Archbishop Jackson spoke of witness during Lent.

He referred to the early Christians and said that faith, witness, proclamation and presence were born out of a situation of violence and colour.

Referring to the Gospel in which Matthew urges caution in the practice of righteousness in front of others lest they seem hypocritical, the Archbishop suggested that, rather than giving alms, praying and fasting invisibly, the invitation in Lent and on Ash Wednesday was to strongly identify with Jesus in a way that does not make a spectacle of ourselves.

The imposition of ashes on our foreheads was living out the life of baptism in the public space and the public square.

“Rather than making a spectacle of ourselves the ashes are a sign of self denial and greater sharing of the gift of grace that Jesus Christ has given us,” he said.

“He invited people to taken them into their everyday lives – things that were part of another tradition. So as we gather here today it is not in a sense of exclusion but in a sense of being sent out with joy and warmth as proclaimers of the word of God,” the Archbishop concluded.