First Irish shrine to ‘Our Lady Un-doer of Knots’ 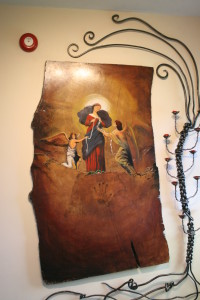 The Papal Nuncio to Ireland, Archbishop Charles Brown, will concelebrate Mass in Corpus Christi Church in Moyross in Limerick on Sunday with Bishop Brendan Leahy where the two prelates will dedicate a shrine to Our Lady Un-doer of Knots.

According to parish priest, Fr Tony O’Riordan, “This will be one of the first, if not the first, shrine to Our Lady Un-doer of Knots in Ireland.”

Our Lady Un-doer of Knots is a favourite devotion of Pope Francis and one that is gaining in popularity in Ireland and elsewhere.

Noting that a prominent theme in Pope Francis’ papacy is that the renewal of the Church must be connected to a move to the ‘outskirts of the city’, Fr O’Riordan said the shrine was a call to renew efforts “to improve the quality of life and opportunities for the people of Moyross, especially our children and young people”.

He added, “The Gospel call is to make the rhetoric of justice and fairness real in the lives of those blighted by injustice.”

The devotion to Mary Un-doer of Knots has become more popular ever since Pope Francis encouraged the devotion in Argentina, and then spoke about it during his first year as Pope.

Explaining the popularity of the devotion, Fr O’Riordan commented, “We all have some ‘knots’ in our lives and many sinful structures in society tie people up in knots, and this devotion reminds us that disciples of Jesus of Nazareth are called to undo the knots in the lives of others in so far as they can do so.”

He added, “It is also a reminder to us that prayers, our and others are a loving and good response to what seem like impossible situations, more than prayer is usually needed, but prayer can lead to solutions emerging.”

The six foot image of Our Lady Un-doer of Knots that is installed in Corpus Christi Church has been painted on to an old section of Irish Chestnut by Limerick artist, Des Langford.

“Another aspect of this occasion,” Fr O’Riordan continued, “is that it will showcase the talents of local artisans such as Des and Eric.”

Archbishop Brown will receive, on behalf of Pope Francis, a section of iron knot-work from the parishioners of Corpus Christi.

Of Sunday’s ceremony, Fr O’Riordan said, “This is a great honour and blessing for the parish, and it expresses the closeness of Pope Francis to the people of Moyross and Limerick. And I know Pope Francis is held in high regard by people in Moyross and elsewhere.”

Framed Copies of the image are available for order from the parish office. Contact 087 928 69 45 or email [email protected] for further information.