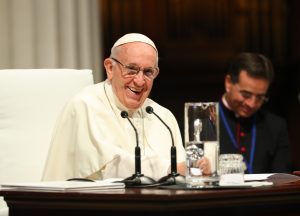 Pope Francis has urged Ireland’s bishops to “set out on new paths for these new times”.

In his last engagement in Ireland before returning to Rome, the Pope met privately with members of the Irish Catholic Bishops’ Conference at the Dominican Convent in Cabra.

During the meeting, he acknowledged the bishops’ current challenges but urged them to persevere in their ministry as heralds of the Gospel and as shepherds of Christ’s flock.

Pope Francis thanked the bishops for their concern for Ireland’s poor – noting their recent pastoral letter on homelessness and substance abuse – and their support of Ireland’s priests. The Pope said that the hurt and discouragement experienced by priests in the face of recent Church scandals is often ignored or underestimated.

In relation to those scandals, which he addressed during Mass at the Phoenix Park and during his meeting with members of the Irish government on Saturday, the Pope told the bishops that the Church needed to “acknowledge and remedy, with evangelical honesty and courage, past failures with regards to the protection of children and vulnerable adults”.

According to the Holy Father, Ireland’s bishops have “resolutely moved forward by undertaking paths of purification and by reconciliation with victims of abuse” and by also establishing, with the help of the National Board for Safeguarding Children in the Church in Ireland, a stringent set of norms to ensure the safety of young people.

“In these years, all of us have had our eyes opened to the gravity and extend of sexual abuse in various social settings. In Ireland, as elsewhere, the honesty and integrity with which the Church chooses to confront this painful chapter of her history can offer an example and a warning to society as a whole,” he said.

The Pope then turned his attention to the importance of transmitting the faith in its integrity and its beauty in a rapidly changing society. He said, “Genuine religious formation needs joyful teachers who can shape not only minds but also hearts in the love of Christ and in the practice of prayer.”