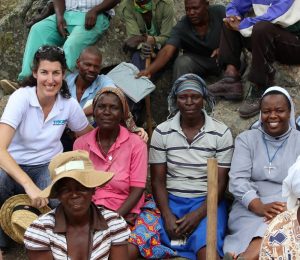 Trócaire’s Country Director in Zimbabwe,  Sarah McCan, has reported that people in the African nation are “fearful but hopeful” following the army’s move against its president, Robert Mugabe.

President Mugabe who has ruled Zimbabwe since independence from Britain in 1980, was put under house arrest on Wednesday. The move came as a response to his sacking last week of his Vice-President Emmerson Mnangagwa, which was seen as a first step towards making his  wife, Grace Mugabe, who is 41 years his junior, leader of the Zanu-PF party and president.

Yesterday Mr Mugabe was seen in public for the first time since being put under arrest, when he attended a graduation ceremony in Harare.  Meanwhile military sources said they were “engaging” with Mr Mugabe and would advise the public on the outcome of talks “as soon as possible”.

On a blog on the Trócaire site yesterday, Ms McCan said the capital city was “strangely calm”.

“The mood is a bit surreal. Tuesday and Wednesday were very tense – there were tanks on the streets and military checkpoints. People were quite fearful and most people stayed home because they didn’t know what was going to happen, ” she writes.

Now people are returning to work and to their normal lives, and  amidst some trepidation, they are hopeful for a better future. “There is massive unemployment and shocking poverty,” she writes. “People have lived through very tough times and they are hoping that there will be a better future

They are also hoping that the transition will be peaceful, she continues. “There has been too much political violence in this country and people do not want to see any more. They want peace and they want something to be hopeful for.”

Ms McCan has been working in Zimbabwe as Trócaire’s Country Director for two years and believes the agency’s work is having an impact.   “We work a lot on human rights issues because unfortunately there is a long history of human rights abuses here.” In addition the charity works with farmers because huge areas of the country “experience devastating droughts so there is a real need for water and for irrigation”.

While President Mugabe will be remembered in Zimbabwe as a hero of the independence movement,  the people now want change, she writes, especially economic and human rights reforms.   Whatever the outcome of the current poitical turmoil the Irish agency will be there, she adds.  “Trócaire has been here for over 30 years. Regardless of what happens, we are going nowhere.”