Home > News > The family is a privileged place of encounter: Pope

The family is a privileged place of encounter: Pope 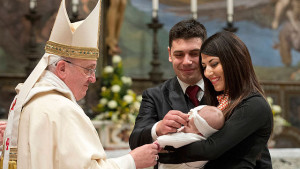 The Primate of All Ireland has called on “everyone with a love of family” to reflect on Pope Francis’ message for World Communications Day which coincided with Sunday’s Solemnity of the Ascension.

The theme chosen by the Pope for this year’s World Communications Day was ‘Communicating the Family: A Privileged Place of Encounter with the Gift of Love’.

As Chairman of the Council for Communications of the Irish Bishops’ Conference, Archbishop Martin said, “Pope Francis expresses a clear and fundamental message for the benefit of the whole human family and it relates to our earliest shared experience and common bond.”

He said the Pope’s message was offered as the Church prepares for the Synod on the Family in October, guided by the theme The Vocation and Mission of the Family in the Church and Contemporary World.

In his message, Pope Francis described the family as the place where we learn to embrace and support one another, to discern the meaning of facial expressions and moments of silence, to laugh and cry together with people who did not choose one other yet are so important to each other.

He said that more than anywhere else, the family is where people daily experience their own limits and those of others, the problems great and small entailed in living peacefully with others.

Emphasising that a perfect family does not exist, the Pontiff said people should not be fearful of imperfections, weakness or even conflict, but rather learn how to deal with them constructively.

“The family, where we keep loving one another despite our limits and sins, thus becomes a school of forgiveness,” he said.

Elsewhere in his message, Pope Francis suggested that when it comes to the challenges of communication, families who have children with one or more disabilities have much to teach everyone else.

A motor, sensory or mental limitation can be a reason for closing in on ourselves, he acknowledged but he added that it can also become, thanks to the love of parents, siblings, and friends, an incentive to openness, sharing and ready communication with all.

He added that it can also help schools, parishes and associations to become more welcoming and inclusive of everyone.

Referring to the role of modern media, which is often an essential part of life for young people in particular, the Pope said it can be both a help and a hindrance to communication in and between families.

“The media can be a hindrance if they become a way to avoid listening to others, to evade physical contact, to fill up every moment of silence and rest, so that we forget that ‘silence is an integral element of communication; in its absence, words rich in content cannot exist’,” he said.

However, the Pope acknowledged that the media can help communication when they enable people to share their stories, to stay in contact with distant friends, to thank others or to seek their forgiveness, and to open the door to new encounters.

He suggested that the great challenge facing people today is to learn once again how to talk to one another, not simply how to generate and consume information.

The family is a community which provides help, which celebrates life and is fruitful, he said and added that once we realise this, we will once more be able to see how the family continues to be a rich human resource, as opposed to a problem or an institution in crisis.

However, at times the media can tend to present the family as a kind of abstract model which has to be accepted or rejected, defended or attacked, rather than as a living reality.

“Or else a grounds for ideological clashes rather than as a setting where we can all learn what it means to communicate in a love received and returned.”

Families should be seen as a resource rather than as a problem for society, the Pope underlined and added that families at their best actively communicate by their witness the beauty and the richness of the relationship between man and woman, and between parents and children.

“We are not fighting to defend the past. Rather, with patience and trust, we are working to build a better future for the world in which we live,” he said.