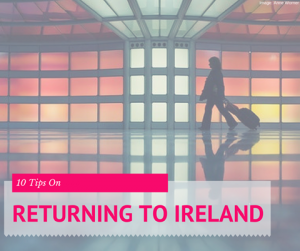 For 83 per cent of returning Irish emigrants, the main reason for their return home is proximity to family. However, once the emigrants come home they find many difficulties, including excessive ‘red tape’, finding employment and accommodation, and achieving emotional well-being.

This is according to a survey of recently returned Irish emigrants in a new report by Crosscare Migrant Project.

“As we have been seeing for some time in our direct work, not all our emigrants make a planned return to Ireland. Some people come home in very difficult situations, with little income or support,” said Sarah Owen, Irish Abroad Networking Officer, Crosscare.

The charity is liaising with government over practical issues, and has fast tracked PPS numbers for people coming home with children.

“We have also been in contact with the Department of Housing in relation to barriers for returning Irish emigrants accessing homeless supports,” she said.

The experiences of Irish emigrants who have moved back to Ireland and a survey with 400 participants are part of the detailed research project. Several people expressed surprise at the unexpected emotional strain of returning to Ireland, and others felt alienated.

“Mentally it was tough. At times it felt like the country I was born in was making it as difficult as possible for me to move back,” said one.

Another stated: “People expect you to just return to normal as though you have never been away.”

As well as challenges, the report also features benefits to return and key advice for others considering a move back to Ireland, such as ‘Research and budget in advance’. Being closer to family is given as the main reason for return. 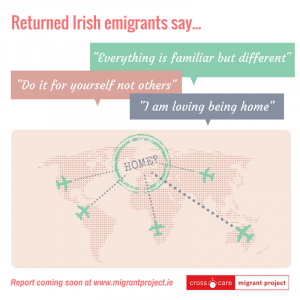 Though many of the difficulties raised in the report affect all of Ireland’s population, these can be particularly difficult to overcome for people returning in crisis. The main difficulties that they found on their return were: insurance and administrative issues (driving licenses); employment (finding a job, qualifications); accommodation; reintegration into Irish life and culture; and social support and emotional wellbeing.

The 23-question survey was conducted online between November 2016 and January 2017. Key findings of the subsequent Home for Good? report were:
• Age: Over 32 per cent were between 26 and 30 years old
• Time spent abroad: 40 per cent lived abroad for a period of three to five years
• Family status: 63 per cent returned with family (partner/spouse/children)
• Reason for return: 83 per cent said proximity to family was the main reason for return
• Future plans: 55 per cent plan to remain in Ireland permanently
• In employment: 85 per cent prior to return; 70 per cent post-return.

Crosscare Migrant Project is a Dublin based non-governmental organisation funded by the Department of Foreign Affairs and Trade Emigrant Support Programme to work with intending and returning Irish emigrants. It is a project of Crosscare, the social support agency of the Catholic Archdiocese of Dublin.
See: www.migrantproject.ie.