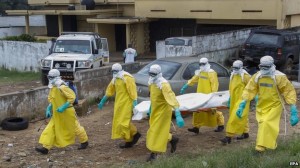 Andrew, a quietly-spoken New Zealander, is one of the International Red Cross/Red Crescent team stationed here at the pastoral centre in Kenema in Sierra Leone where Paddy Ryan CSSp and I are based.

There are two very different sides to Andrew’s role as the Discharge Officer at the Field Hospital for Ebola patients.

As he puts it himself, “there is only one entrance to the field hospital but there are two exits”.

One exit is to the main road, to continuing life, and return to family and community.

Patients who no longer test positive for Ebola are moved to the recovery ward and, after three weeks, if they are still clear, they are discharged from the hospital.

This is an occasion of much celebration, happiness and well wishing – it is a victory for the staff and a ray of hope for the other patients in the hospital.

The other exit, sadly, leads to the cemetery.

For Andrew, who is assisted by a very well-trained burial team, the most difficult and dangerous aspect of work is the preparation for burial of those who have died from Ebola.

The virus does not die with the victim. In fact, it becomes more virulent in the dead body.

The Red Cross has prepared an area of ground a couple of hundred metres from the field hospital to be used as the cemetery. To date 120 victims of Ebola – male and female, Christian and Muslim – ranging in age from 50 years old to a mere 3 months are buried there.

Each burial is an occasion of sadness. The Red Cross makes a great effort to contact the families of those who have died. 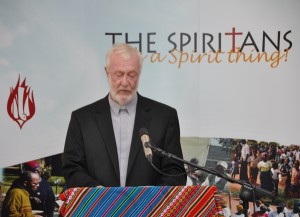 If the deceased is from Kenema District or its surroundings, some family may attend the burial.

But the majority of those who have died here are from as far away as Freetown, Pujehun or Makeni and are buried with no family or friends present.

In some parts of the country mass graves have been used to bury victims of Ebola but here the cemetery is very well laid out.

Each body is buried in an individual grave which is marked with the deceased’s name, age, place of origin and date of death. A photograph is taken of each grave and sent to the family.

Earlier this week Andrew informed me that his ‘tour of duty’ was soon coming to an end and he would dearly love to have the ‘Ebola cemetery’ consecrated before his departure.

As the Red Cross does not always know the religion of a victim, Andrew recites the Our Father and one of the Muslim workers recites a passage from the Koran at each burial.

We discussed the idea of a blessing for the cemetery with Andrew’s team-leader; he was very supportive of the idea saying that ‘it is our duty to treat all our patients with dignity and respect. If a patient dies, we must offer the same dignity and respect to the deceased’.

Having consulted with our local bishop, it was immediately decided to have an inter-religious service.

The local authorities, the District Ebola Task Force, the City Council, the Imams of the different Muslim communities as well as the Anglican and Methodist churches all agreed that they wished to be present and to take an active part in the ceremony.

I informed Andrew that he had to provide a small bottle of gin, a bottle of water and two glasses for the ceremony.

He was a little bemused by this but it was explained that ‘pouring libation’ is integral to all cultural ceremonies in Sierra Leone.

Usually performed by a respected community elder, the purpose is to appease the ancestors who have not been forgotten and whose sharing in the ceremony is sought.

The person designated to pour the libation addresses the ancestors and then pours a little gin and a little water on the ground, and also takes a little himself.

The ceremony itself, on the morning of Friday 21st November, was a very simple one with Christian and Muslim prayers, readings from Scripture and from the Koran, short statements from the various religions and organisations present, interspersed with appropriate hymns and songs sung by an ad hoc choir.

There was a very poignant moment during the ceremony when the two latest victims of Ebola were brought for burial by the burial team, all of whom were dressed in their protective clothing.

The bodies, placed in ‘extra-secure’ body bags, were quietly and respectfully laid to rest under Andrew’s watchful eye.

Bishop Patrick Koroma gave the final Prayer of Blessing and, after a few wreaths were laid in the cemetery, we departed in silence to the sound of the workers as they filled in the two latest graves.

In 2013, Brian Starken CSSp took up an appointment in Sierra Leone where he had first served in the mid-1970s. He is currently one of two Irish Spiritan priests ministering with the province of Sierra Leone. The first Spiritans, including Dubliner Fr Tom Bracken, arrived in the West African country in 1864.