Home > Featured > “I am excited at the thought of returning to Ireland!” – Pope Francis

“I am excited at the thought of returning to Ireland!” – Pope Francis 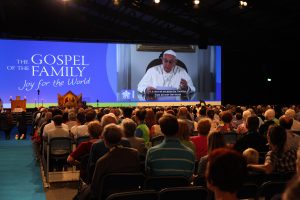 Thousands of pilgrims attending the opening liturgy of the World Meeting of Families at the RDS on Tuesday evening were surprised to hear a message from Pope Francis in which he said he was “excited” about returning to Ireland.

In his message, Pope Francis offered warm words of greeting to the Irish people and he shared his hope that WMOF2018, which takes place from 21 to 26 August, will be a source of encouragement to families.

“As I prepare to visit Ireland in a few days’ time for the World Meeting of Families, I send a warm word of greeting to all the Irish people. I am excited at the thought of returning to Ireland!” the Pontiff said – a reference to his visit in 1980, when he stayed with the Jesuits in Dublin while studying English.

He said the World Meeting was a celebration of the beauty of God’s plan for the family.

“It is also an occasion for families from all over the world to meet and support one another in living out their special vocation.”

Families today face many challenges in their efforts to embody faithful love, to bring up children with sound values and to be a leaven of goodness, love and mutual concern in the larger community, the Pope recognised.

“I hope that this festival will be a source of renewed encouragement to families everywhere, especially those families that will be present in Dublin.”

He also expressed the hope that WMOF2018 would remind all of the essential place of the family in the life of society and in the building of a better future for today’s young people.

He added that although the specific reason for his visit to Ireland is the World Meeting of Families, “I would like to include all the members of the Irish family”.

In a gesture of reconciliation towards the North’s different denominations, he said he prayed the visit might “further the growth of unity and reconciliation among all Christ’s followers, as a sign of that lasting peace which is God’s dream for our whole human family”. 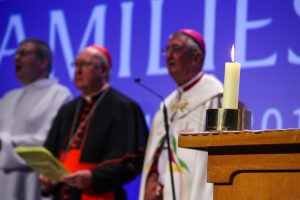 He noted that there were those who would look at the World Meeting as some sort of ideological gathering to celebrate a type of family that probably does not exist.

“Whatever of the past, here in Dublin the World Meeting is something much more profound: it is to reflect the opening words of our reading: ‘You are God’s chosen race; he loves you’,” Dr Martin said.

He stressed that the family is not a remote ideological notion but the place where compassion, kindness, gentleness, patience and forgiveness are learned, practised and spread.

Compassion, kindness, gentleness, patience and forgiveness are the bonds that bring us together, he said, adding that most of us would admit that, while our families may try to realise that ideal, in reality things are not so easy. 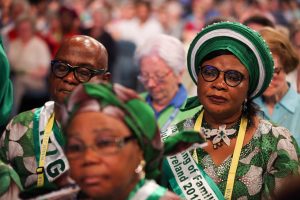 “Tensions arise. People struggle. People fail. People are unfaithful. Families can be places of violence and harshness. Only the power of love can purify and restore and heal our weakness.”

Of the Church, he said it must be a place where solidarity reigns, where we teach and advise and support each other, and not in the sense of any superiority, but in all wisdom.

The family is the domestic Church. The family must be the place where all these dimensions of the Christian life are deepened and lived. The family is not a closed place but must always be missionary and have that same drive towards the periphery, towards those who are marginalised, which Pope Francis presents as a fundamental dimension of the Church.

Acknowledging that family life today is changed, he said families in Ireland have many opportunities and many new challenges. These would be looked at over the three days of the Congress in the RDS.

“Look at communications and social media. They can become a path of openness and they can also become narrow and addictive. How do we get young people to learn to use the gifts that God and human creativity will provide for them in a challenging future?”

Concluding, the Archbishop thanked God “for the extraordinary ordinary love of our families”.

He said that “We commit ourselves to help young people to understand what love truly means. We thank God for the at times immense sacrifice that exists in the love within families. We pray for those who have never experienced such love or from whom such love was stolen through abuse or neglect.”