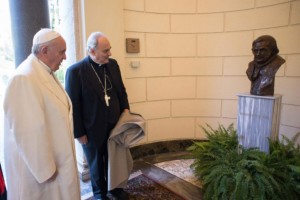 Pope Francis has said the Big Bang theory of the origins of the world and evolution are “compatible” with a divine Creator.

Speaking to a meeting of the Pontifical Academy of Sciences gathered at the Vatican to discuss ‘Evolving Concepts of Nature’, the Pontiff said Big Bang, the theory that the universe was born in a cosmic explosion about 13.7 billion years ago and has expanded and evolved since, “doesn’t contradict the intervention of a divine Creator, but demands it.”

He said the beginning of the world was not “the work of chaos” but part of a divine plan by the Creator; it derived “directly from a supreme principle which creates by love.”

“Evolution in nature is not inconsistent with the notion of creation, because evolution requires the creation of beings that evolve,” the Jesuit Pope told the meeting.

Pope Francis also warned that God should not be regarded as some sort of “magician waving a magic wand”.

“When we read about creation in Genesis, we run the risk of imagining God was a magician, with a magic wand able to do everything. But that is not so,” the Pope said.

“He created human beings and let them develop according to the internal laws that He gave to each one so they would reach fulfilment.”

This work of creation has been going on for centuries and centuries, millennia and millennia until it has become what we know today, “because God is not a demiurge or wizard but the Creator who gives being to all entities”, the Pontiff observed.

He added that the scientist must be moved by the confidence that nature conceals, in its evolutionary mechanisms, potential that our intelligence and freedom can discover and implement in order to develop the design of the Creator.

“So, no matter how limited, the action of man partakes of the power of God and is able to build a world fit for his dual life, bodily and spiritual, to build a humane world for all human beings and not for a group or class of privileged people.”

While some commentators have expressed surprise at the Pope’s statements, as far back as 1950, Pope Pius XII said that there was no intrinsic conflict between Catholic doctrine and the theory of evolution, provided that Catholics believed that the human soul was created by God and not the result of random evolutionary forces.

It was a position which Pope John Paul II concurred with in 1996.

However, Pope Benedict XVI appeared to shift the emphasis towards intelligent design, the idea that natural selection on its own is insufficient to explain the complexity of the world.

In 2005, his former student, Cardinal Schönborn wrote that “evolution in the sense of common ancestry might be true, but evolution in the neo-Darwinian sense of an unguided, unplanned process is not”.

Pope Francis’s comments to the Pontifical Academy of Sciences followed his unveiling of a bronze bust of Benedict XVI at the academy’s headquarters in the Vatican Gardens, where he praised his predecessor.

“No one could ever say of him that study and science made him and his love for God and his neighbour wither,” Pope Francis said.

“On the contrary, knowledge, wisdom and prayer enlarged his heart and his spirit. Let us thank God for the gift that he gave the church and the world with the existence and the pontificate of Pope Benedict.”

A 2013 Pew Research survey found that 33% of all American adults believe that “humans existed in present form since [the] beginning.”

Among Catholics, the percentages are slightly lower; 31% of Hispanic Catholics deny evolution, as do 26% of white Catholics.

Among white evangelical protestants, the number is 64%.