Home > Featured > Every five hours an Irish child is made homeless

Every five hours an Irish child is made homeless

Every five hours, another Irish child becomes homeless, according to the charity Focus Ireland, which this week

highlighted the extent of the problem.

Citing government figures, Focus Ireland said that in January there were 7,167 people registered as homeless, 2,407 of whom were children.

Looking back at statistics from the last three years, the number of homeless people in this country has doubled since July 2014, when 3,258 people were registered as being without a home.

“In recent years we have seen a pattern of a fall in the number of families becoming homeless in December followed by a sudden increase in January. This year there is a different pattern with no real fall in December, and a small fall in January.” 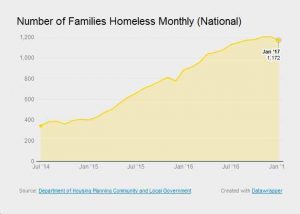 Focus Ireland, founded by Sr Stanislaus Kennedy (Sr Stan) of the Religious Sisters of Charity, is calling on the government to devote greater energy to tackling the homelessness crisis.

In particular, it wants the Minister for Housing Simon Coveney to set out “a clear set of actions and objectives” for the next three years that will prevent family homelessness and provide support to those already suffering homelessness.

At present, there are only 1,829 units of social housing under construction, according to figures quoted in the Dáil on Friday. During the 1950s, when Ireland was not as rich a country as it is now, we were able to build social housing at a rate of 5,250 units a year. In the 1970s, again a period not known for great prosperity, we built social houses at a rate of more than 6,153 a year.