Home > Latest > Eucharistic Adoration is a winner among children

Eucharistic Adoration is a winner among children 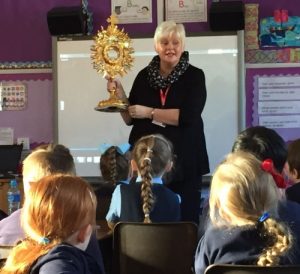 Over 20,000 children have been involved in a programme teaching Eucharistic Adoration since it started four years ago.

Antoinette Moynihan began the ministry, Children of the Eucharist, after the Eucharistic Congress. “The desire in my heart became very strong after working at the congress with the children,” she told CatholicIreland.

She prayed about it, approached the Apostolate of Eucharistic Adoration and, with their blessing and ecclesial approval, began to bring her programme to the primary schools of Meath, where she lived.

The first schools to pilot the programme were Kentstown and Yellow Furze National Schools. This year the 2nd class children she had begun with were in 6th class. “I had them for adoration a few weeks ago and they are a great group,” she told CatholicIreland. “It [Eucharistic Adoration] is natural to them. We did 45 minutes Adoration no problem. It is a great grace.”

From her local parish in Meath, her ministry has grown organically across Ireland and now to the UK. In November Children of the Eucharist began in five schools in Scotland, and in February 2017 it is due to pilot in a number of schools in Durham, Newcastle and Chesterfield in England. Antoinette estimates that in the last two months alone more than 2,000 children have got involved in it.

“We work through schools in the areas that are open to it,” she said. “We don’t advertise as such. People see it, hear about it, and then the calls come. We book in advance with new schools and also work with existing schools.” She now has a spreading Confirmation programme and bookings up until mid 2017.

A team working with Children of the Eucharist forms groups and leaders around the country. Antoinette and her colleague Aoife normally go on the road, initiating the programme in new areas. Then core national leaders service the area they leave. Antoinette and Aoife then move on to introduce the programme to new areas. “We are all under the banner of Children of the Eucharist.” The team keeps in contact with the leaders nationwide and they gather nationally twice a year.

When Antoinette is introducing the programme in a school, she usually speaks for about an hour to the First Communion classes about the Real Presence, Confession and Holy Communion.

She has a monstrance, and shows it to the children, explaining what Eucharistic Adoration is. Opening the door of the monstrance, she peers through at them. “They can see me. I tell them, ‘Jesus is looking through the monstrance and he can see you.’”

After the talk, Antoinette brings the children to the church and leads them in adoration for half an hour. By now they know about the tabernacle, the sanctuary light and the monstrance. A host is placed in the monstrance, and they sing ‘O Sacrament Most Holy.’ Intercessory prayers and the children’s own prayers follow. 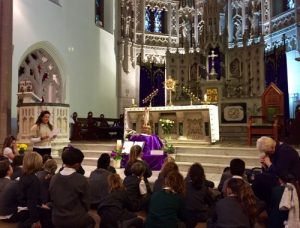 The feedback from the children is striking. “They love it. Kids are open and pure. They connect with God in a way adults can’t,” says Antoinette.

They tell her about the things that Jesus tells them in Eucharistic Adoration. “Many children speak about how Jesus told them not to worry, to be kind, to pray for one another, to be kind to the poor, to stay close to Him [Jesus].”

In Scotland a boy told them that “Jesus said: ‘Let the body of Christ compel you.’” Antoinette was accompanied by a priest at the time. “We nearly passed out!” A little girl in Newry told them that “Every heart is sacred to Jesus.”

The ministry has a strong link to the apparitions of Fatima. “I know Our Lady is guiding us. I do believe the prayers of our ancestors and the prayers of people adoring locally have brought us to that area. It’s the work of the Holy Spirit.”

Antoinette is supported in her ministry, which takes her all over the country, by her husband and two daughters.

Meanwhile, the growth in demand has necessitated taking on two employees – one full time and one part time – to handle calls. For further information see:  https://childrenoftheeucharist.ie/