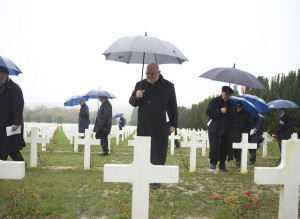 Pilgrimage of European Bishops to commemorate the First World War in Verdun.

Bishops from across Europe on Tuesday visited Verdun to mark the centenary of the outbreak of the First World War.

Two simple services of prayer were held at the Ossuaire de Douaumont and individual bishops laid votive lamps in the chapel of the Ossuaire where the bones of 130,000 unknown soldiers repose.

In a statement issued afterwards, the bishops said, “In the Cathedral Notre-Dame in Verdun we celebrated Vespers for the Dead.”

“Our visit marked for us a moment to take spiritual stock as we look back over a century when light and darkness have wrestled in Europe as at no other period in her long, eventful and often tragic past.”

“We remember the fallen and are still numbed by recollection of the scale of the human loss the conflict engendered: almost 1 million soldiers died in the Battle of Verdun. What strikes us again is the sheer folly of war and the pity of it all.”

“At the dawn of the 20th century the destinies of nations in Europe were intimately interlocked, World War I need not have happened.”

The bishops also took the opportunity to intercede for all the victims of war and armed conflict, military and civilian, and we pray for peace in our world.

They paid tribute to the achievements of the European project and the way the vision of the founding fathers of the European Union, and those they inspired down the years, contributed to peace and understanding among nations who so often resorted to armed conflict in the past as a way of resolving their differences.

They also recalled how even churchmen stoked the fires of conflict and fuelled nationalist passion: “it is a recollection tinged with regret and shame,” the bishop stated.

But they also remembered “how stoically and persistently Pope Benedict XV advocated cessation of arms and promoted peace.”

Our visit of pilgrimage to Verdun makes us, as bishops, more resolute in our commitment to assist Europe recover the Gospel roots of its identity, to appreciate anew the values – many of them profoundly Christian – which bind her as a community, and to promote a future for all Europe’s citizens and for the wider world where peace and justice reign, they stated.