Edmund Rice Schools Trust students have called for an end to homelessness. They started their first day this term by presenting a petition, signed by almost 10,000, to Minister Simon Coveney TD.

The secondary students handed the Minister for Housing the petition signed by fellow students from schools in Waterford and East Cork on Monday 9 January at The Carrigaline Court Hotel, Cork. High Hopes Choirs (choirs for people who are homeless) from Cork, Waterford and Dublin joined them at the presentation.

“We want to be, and believe we can be, the first generation that ends homelessness in Ireland. We don’t want to grow up in an Ireland that can’t provide homes for people. That is not the Ireland that represents us,” said Mark Hartery, a 16-year-old 5th year student at Ardscoil na Mara, Tramore.

“We were delighted to be able to meet with Minister Coveney to tell him what the next generation of voters hopes for,” he added.

They stated that their resolution for 2017 is to keep homelessness in the public eye so that “the government has pressure put on it to continue to do everything it can to make homelessness history.” 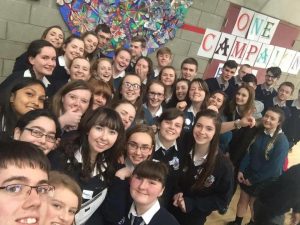 Students had been learning more about social justice issues and set up the ‘One Campaign for Change’. As part of this they gathered the petition signatures to make known their concern about growing up in a country that cannot provide basic housing for so many people, in particular children.

They were spurred on when the number of homeless children climbed above 2,400 in the autumn. They also became aware that students in each of their schools are living in families at risk of losing their homes.

“One of the things we are trying to raise awareness about is the reality that homelessness is present in all communities throughout the country,” said Mark Hartery, who is one of the initiators of the campaign. “It is something that is affecting families within our own communities, and in towns way beyond the larger cities.”

The students have been working to raise awareness about homelessness for over a year. On 15 May 2016 an article by Mark Hartery on their work to help alleviate homelessness was published in The Journal.ie. 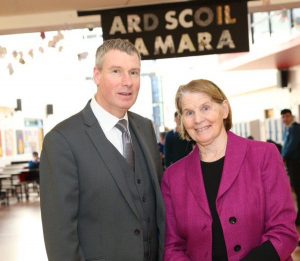 In it he wrote that he had not taken much notice of homelessness until he took part in a sleep-out for Focus Ireland and it completely changed his perspective. Walking in the shoes of homeless people gave him a great motivation to help make a difference.

The Peace and Justice group at school met with members of the High Hopes choir in Waterford, and on awareness days they have heard from experts such as Sr Stan of Focus Ireland and Fr Peter McVerry of the Peter McVerry Trust.

When they were asked to write a Proclamation for a New Generation to celebrate the centenary of 1916, they based it around homelessness.

The petition is still open on www.onecampaignforchange.weebly.com, as the students want to collect 50,000 signatures.